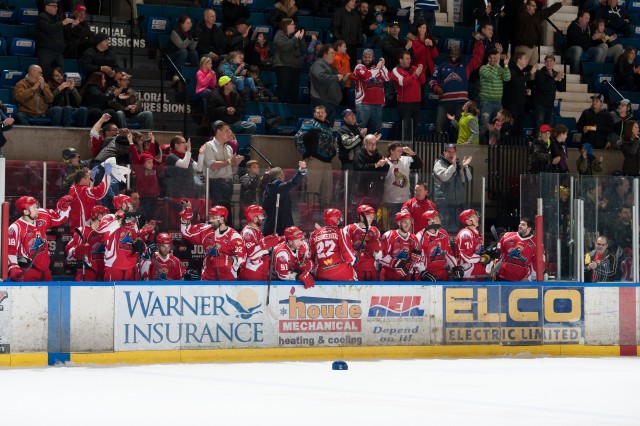 CORNWALL  Ontario – The red-hot River Kings dumped St-Georges 3-1 on Sunday afternoon on “Fan Appreciation Game” in front of a season-high crowd of 1,285.

Keven Veilleux scored all three goals and was named the game’s first star. Charles Corsi earned the victory in goal for Cornwall with a 30-save performance.

The River Kings are 4-0-1 in their last five contests and haven’t lost in regulation since Jan. 15 at Laval.

Veilleux opened the scoring for Cornwall with 1:28 to go in the first when he buried a Sy Nutkevitch feed past Pier-Olivier Pelletier.

St-Georges leveled the score at 13:02 of the middle frame on a powerplay goal by Eric Bertrand.

With the River Kings on a powerplay of the own, Veilleux netted his second of the contest on an absolute blast from the point with 4:22 to play in the second.

Veilleux iced the game with an empty-netter with 34 seconds to play in the contest to complete the hat trick.

Sasha Pokulok played his first game in Cornwall since being dealt to St-Georges prior to the LNAH trade deadline. Pokulok was booed just about every time he touched the puck.

FRIDAY: At St-Georges, Cornwall defeated the Cool FM 2-1 in a shootout as Sy Nutkevitch got sweet redemption by scoring the winner. Pete Karvouniaris was spectacular in goal with a 34-save performance. Nicolas Pard scored his 9th of the season 25 seconds into the third which eventually sent the game into overtime. Nutkevitch, who had the game on his stick back on Oct. 30 at St-Georges but his the post in the shootout, got much better puck luck on Friday. His shot in the shootout hit the post then banked off the Cool FM goaltender and in to give Cornwall the win.

NEXT WEEKEND: Cornwall is back on home ice for a rare Friday night game next week. The River Kings host the defending LNAH champion Thetford Assurancia at 8 p.m. on Friday, Feb. 5. It will be “Poster Night” at the Civic Complex.

One Response to "Cornwall Ontario River Kings Heat It Up With Two Wins FEB 1, 2016 #LNAH"