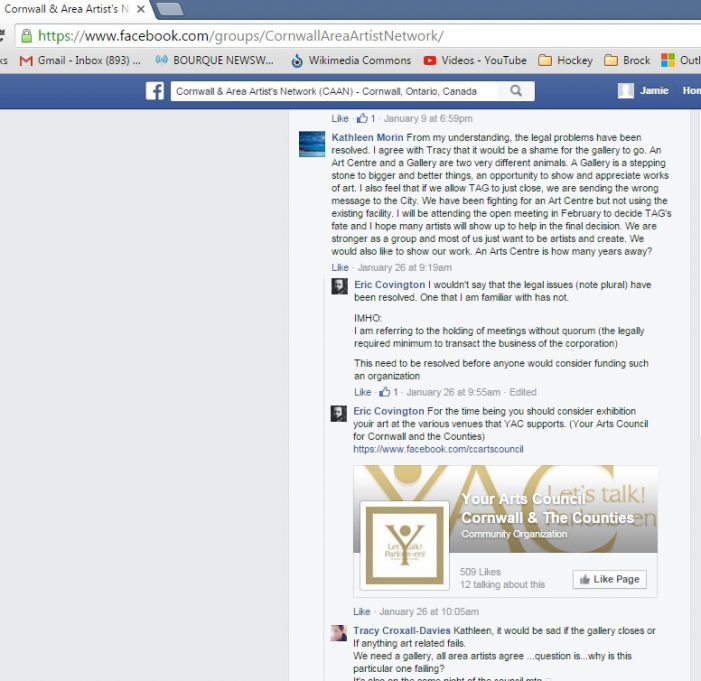 The problem with media is that sometimes, really bad journalists with really poor integrity can take innocent bits of an answer and build a perspective that creates an entirely different meaning.

Today the Seaway News issued yet another hatchet job against TAG Cornwall, the city’s 34 year old public art gallery that may be shutting its doors this year because of combined factors such as a weak artistic community, historic under funding from the city, ugly horrible politics, and simply poor historic execution.

I personally discovered this when I was asked by the former Executive Director for assistance as she feared for her job and felt she was being bullied by Current City Councilors Elaine MacDonald and Carilyne Hebert.       The ED shared many incriminating documents of the two ladies and the board they were on, and after a few missives both MacDonald and Hebert(along with Hebert’s mother) resigned from their board.

At its AGM in January 2015 I ended up on the board of directors.    The room was nearly empty, almost all of those present ended up on the board.   It was a hodge podge put together it seemed of supporters of the now former ED.  Nobody from groups like YAC or Focus Art.

The board soon discovered a lot of historical issues, including the permanent collection.  At the same time Eric Covington, quoted above and in the Seaway News story had a glass show due to start in the Spring.   At a board meeting Mr. Covington was quite upset when it was discussed that his show might have to be delayed or cancelled based on an investigation the board voted unanimously to initiate and conducted by yours truly.

Mr. Covington leaked the investigation to the ED while she was on paid vacation, and shortly left the board after a failed power play for his clear conflict of interest.    He has been posting nasty stuff since including an actual appeal to council to not fund the gallery.

At that point our current President Wyatt Walsh took over.  We had a clear mandate, to clean house, update the charter, membership structure, and create a foundation to build on and not continue what had been going on for over a decade.   We have exceeded those goals.

The sad reality is that Cornwall doesn’t have a strong art community.  What it does have is highly splintered and political.   There are days that it seems more energy is spent by people like Heather Smith, Kimberley Cameron, Adele Constantineau, Frank Burelle,  Jason McNamara, Tracy Lynn Chisholm, Jacqueline Milner, and others on politics instead of art to the point that it’s very difficult to move forward and build anything.

After the Executive Director was terminated I had the opportunity to literally spend every day that the gallery has been open since listening and learning how dysfunctional the art community and the politics surrounding are in the region.

Frankly she should be honoured for surviving for twenty years with the nonsense that existed in the gallery.

But I am very proud to say that in less than one year, the gallery installed a new charter that conforms to current standards, created a new membership structure to better serve its members, created our Artists Guild to focus resources to artists that are trying to earn an income from their talent, hosted four major events, and supported the arts community as best as we can.

What we endured as a board were threats and lies from some of the group of artists around Mr. Covington.   For example there is no litigation for the gallery.   The board never met without having quorum, and have followed all of the rules under the act.  Those that said “F^*(%! the rules” are no long on our board.

Our last juried show had a scoring system which had not been used before.

Essentially we listened to the complaints, and took the legitimate issues and moved forward.  We have a policy of politics ending at the door.

We brought in A list talent like Barrie Wentzell and Aislin.   Mr. Wentzell went as far as donating $5,000.00 worth of his work to raise funds for the gallery,  and has now joined our board which has led to a an idea embraced by several councilors to have Cornwall Housing designate some units for artists as there currently already a few living in them.

Now the gallery is on the brink of closing.    Hard decisions are about to be made.   We know we can find money one way or another to keep the gallery open, but without enough community support it would feel wrong to tap those whose generosity to the arts is real and shouldn’t be abused.    That support is needed.  The gallery should be busy seven days per week.

Recently local lawyer Andre Bourgon sponsored a Senior Drawing Class to be given by Lorna Foreman who has been with the gallery off and on since its earliest days.      Because of his sponsorship the artist gets half of the money, the gallery gets half, and instead of having to pay $40+ for the sessions, the seniors can pay via donation.   The sessions have filled before we even advertised them because there’s a hunger for art in our community.

For the gallery to survive it needs more from local artists.  It needs to be a community centre for arts.

There needs to be more coming from the community instead of relying on outside sources for assistance.

In the 90’s the city conducted a study on having an art centre.  Over 20 years later there still isn’t one, but there is our public art gallery.   While there is a very limp and weak attempt now to create an arts centre it’s not a true reality.  The coffers are empty.   The monies from the progress fund will be over taxed just for the Benson Centre.  If Elaine Macdonald, and those in her circle of the group were serious they’d donate the cash they’ve raised to the gallery.

The City has an Arts and Culture committee that has not supported the gallery this year, and not shown up for a single event.

YAC took money for a position it doesn’t have.    What kind of arts council doesn’t support a public art gallery? Betty Healey, YAC’s President actually posted to TAG’s facebook notification of a meeting for Tuesday night, attacking us for doing so during funding.    Not once did she simply email and ask about what was going on.   She subsequently deleted her comment.

Ultimately it will be up to artists whether their public art gallery will continue or whether there will be another empty storefront on Pitt Street.

TAG’s board has a plan ready to roll to purchase the building and convert the old JL Computer store into the “TAG Annex” which would have studio space for 12-16 artists.

Ultimately, like other areas of the City, progress can only happen if people work together.

If TAG closes its doors it will not be a failure of the board, but of the community.

Is that what Cornwall wants?

The community has its chance to speak at TAG Cornwall (168 Pitt Street) on Tuesday February 9th at 7 PM.

The board will be looking for solutions and offers of assistance.    It will be interesting to see who steps up to save the city’s public art gallery since 1982.