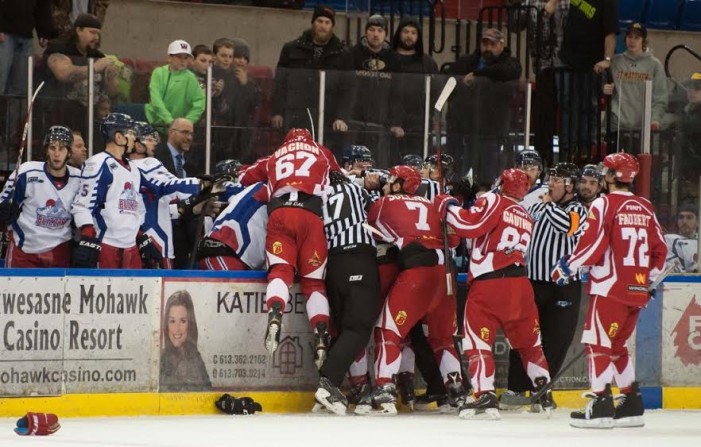 The River Kings, who had a long and eventful bus ride home from Jonquiere early Saturday morning, had an even longer Saturday night at the Civic Complex. Cornwall dropped a 7-2 contest to Trois-Rivieres in front of a disappointing gathering of 956.

The River Kings entered the contest 7-1-1 in their last nine LNAH games. On this night, the victory was sweet revenge for Trois-Rivieres, which was dealt a 9-3 loss by the River Kings last week at home.

Cornwall came out flat in the first period. Former River Kings centre J.P. Caron scored from the top of the circle 94 seconds into the contest before Pierre-Olivier Beaulieu beat Pete Karvouniaris with a wraparound goal at 1:57 of the first.

Thomas Beauregard then riffled his 30th of the season past Karvouniaris at 12:15 of the opening frame to give the Blizzard a 3-0 lead.

David Croteau got the River Kings on the board when he one-timed a perfect feed from Nicolas Larocque-Marcoux past Marco Cousineau with 53 seconds to play in the first. But Trois-Rivieres responded quickly on a Carl Gelinas marker with 11 seconds to go in the opening period.

Charles Corsi replaced Karvouniaris to start the second but the River Kings didn’t fare much better. Beauregard scored his second of the contest at 10:22 of the second before Caron beat Corsi at 12:08.

Cue the fireworks. After the sixth Blizzard goal, a scrum ensued at the Trois-Rivieres bench and the entire Cornwall bench emptied. Clearly frustrated, the River Kings stuck together and showed they wouldn’t go down without a fight.

Beauregard fired home his third of the contest on the powerplay with a perfectly placed wrist shot that beat a helpless Corsi at 16:10 of the second.

Karvouniaris was back in goal to start the third period for the River Kings, while the Blizzard went with backup Marc-Antoine Gelinas for the final frame.

Cornwall’s Nicolas Pard rounded out the scoring with a shorthanded goal for the River Kings at 8:14 of the third.

In the first period, Cornwall’s Curtis Tidball pinned Boby Fugere and Maxime Vachon of the River Kings had a lengthy battle with Chris Cloutier.

FRIDAY: On Friday night at Jonquiere, the River Kings edged the the first-place Marquis 3-2. The red-hot Francois Ouimet scored his 15th goal of the season with 5:19 to play in the second period for the eventual game-winning goal for Cornwall. Danick Malouin chipped in a goal and an assist against his former team and Pard also found the back of the net for the River Kings. Corsi was spectacular in the Cornwall crease with a 38-save performance.

BUS TROUBLES: The River Kings didn’t arrive in Cornwall until Saturday morning at 8 a.m. Unfortunately, the team bus ended up in the ditch on the way home from Jonquiere. Thankfully, no players or staff were hurt in the incident.

NEXT WEEKEND: The River Kings next two games are on the road. Cornwall travels to Riviere-du-Loup next Friday to take on the 3L. The following week, Friday March 4, the River Kings visit the Sorel Eperviers. Cornwall is back on home ice Saturday, March 5 in its regular-season finale vs. Jonquiere. The first round of the LNAH playoffs will begin the following weekend.