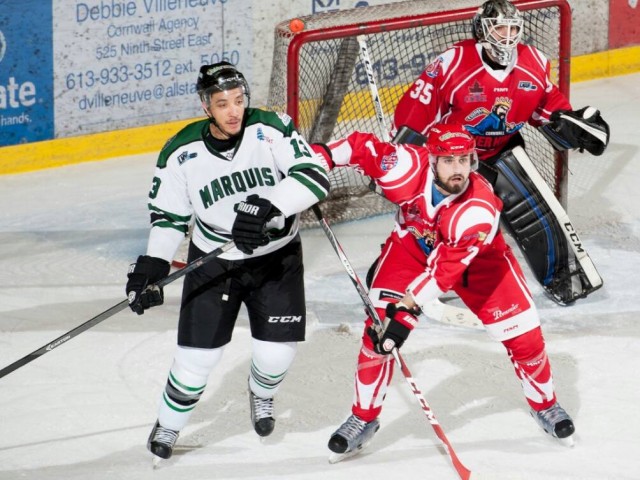 Francois Fortier’s hat trick propelled the Jonquiere Marquis to a 7-3 victory over the River Kings on Saturday night in front of 847 fans at the Civic Complex. Jonquiere now leads the best-of-seven series 2-0.

Nicolas Larocque-Marcoux opened the scoring for the River Kings 2:59 into the first period. But the Marquis responded with a pair of goals by Fortier 75 seconds apart. Fortier beat Charles Corsi at 11:41 with Jonquiere on a powerplay and then again at 12:56 with a shorthanded marker.

Cornwall came out strong in the second and leveled the score on a Charles Lachance marker at 3:35.

The River Kings took their first lead of the series when Antony Courcelles best Loic Lacasse with a powerplay goal at 10:52 of the middle frame.

Then, the Marquis offence took over. Enforcer Sean McMorrow, Jeremy Vigneault-Belanger and Mathieu Brunelle scored goals in a span of 2:44. The Vigneault-Belanger marker chased Corsi in favour of Charles Lavigne.
Fortier then added his third of the contest at 17:38 of the second to give Jonquiere a commanding 6-3 lead after 40 minutes.

GAME 1: The Marquis powered to a 2-1 victory over the River Kings on Friday night to take a 1-0 lead in the first-round LNAH series. Fortier opened the scoring for Jonquiere with a powerplay marker at 19:11 of the first.
Samuel Groulx gave the Marquis a 2-0 lead at 7:48 of the second with another powerplay goal, which turned out to be the game winner. Larocque-Marcoux brought the Kings to within a goal with 2:17 to play in the contest.  Cornwall outshot Jonquiere 22-21.