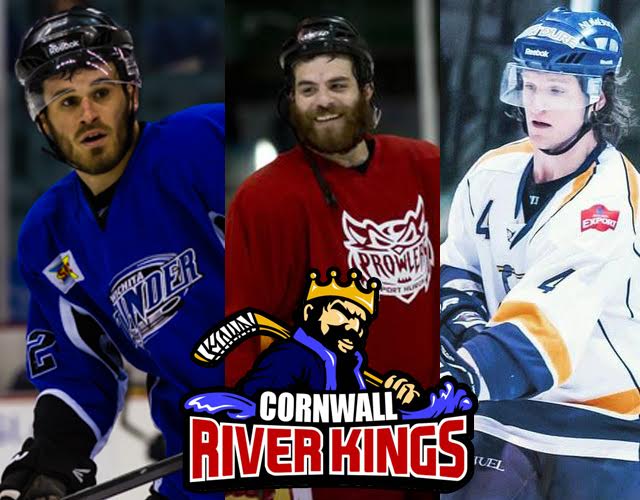 CORNWALL – Earlier this summer, the River Kings added offensive punch with some key signings. Now, General Manager Rick Lalonde has added a different kind of punch, with three massive signings that promise to make the 2016-17 season the most exciting in team history.

The LNAH team has officially come to terms with Erick Lizon, Ahmed Mahfouz and Ryan Hand.

“We’ve improved our hockey club dramatically this summer,” said Lalonde. “And with the addition of Lizon, Mahfouz and Hand, we will be among the toughest teams in the LNAH.”

Head coach and assistant general manager Bob Desjardins sure can’t wait for the 2016-17 season to begin.

“These signings are absolutely huge for our hockey club,” said Desjardins. “We also have our three top picks from the draft under contract and this shows how much hard work has gone into this team in the off-season.”

Lizon is a 6-foot-4, 205 lb. heavyweight that River Kings fans have longed for.

The veteran forward has had pro stops in the AHL, ECHL, UHL and CHL. He previously spent two seasons in the QMJHL with the Victoriaville Tigres.

“I am excited to come to Cornwall and play in a new league,” said Lizon. “Rick and I have been talking for a long time now and it’s really nice to be wanted.”

Lizon is familiar with at least one River King, a player he’s battled for many years.

“Ryan Hand and I have kind of followed each other around over the years and we had our feud in junior and we’ve fought a few times,” said Lizon. “We’ve already chatted just recently and we’re looking forward to playing together.”

Lizon, a 30-year-old from Kitchener, ON, suited up for the Wichita Thunder in the ECHL the last two seasons, picking up 22 points and 282 penalty minutes in 126 games.

“Erick is a player that has been coveted by so many teams in the LNAH and we’re happy to have him in Cornwall,” said Desjardins.

Mahfouz has played the last six seasons in the Federal Hockey League. The 27-year-old from Ottawa won a championship with the Akwesasne Thunder in 2011.

Mahfouz is excited to play close to home and play in front of family and friends, many who supported him during his time in Akwesasne.

“I’ve had some success in other leagues and hope to continue the success with the River Kings this coming year,” said Mahfouz, who is eager to prove himself in the LNAH.

“I hate losing and I think I’ve had some successful years in winning in junior and semi-pro and I will do everything I can, whether it’s score a goal, make a big hit or fight in my weight class, to win,” he said.

Hand, acquired last week from Thetford, has also officially signed with the Kings.

In 37 games with the Assurancia last season, the 31-year-old chipped in a pair of assists and 163 penalty minutes. He has a 610 penalty minutes in 119 career LNAH contests.

“Ryan is a versatile player and we needed on our team,” said Desjardins. “He is a veteran who knows this league and he has everyone’s respect in the LNAH.”

The team also has under contract veteran pugilist Martin Lariviere. Clearly, the Civic Complex will be a difficult barn to visit for opposing LNAH teams.