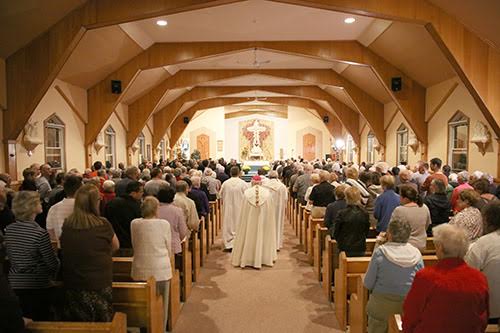 Sainte-Croix Parish to Merge with Saint-Félix-de-Valois

CORNWALL, ON – On Saturday, January 7, 2017, the final Mass will be celebrated in the Roman Catholic church of Sainte-Croix, which was founded on January 17, 1954 when it was detached from the parish of Saint-Félix-de-Valois. Following the Mass, the church building will officially cease to be a Catholic place of worship and the parishioners of Sainte-Croix will once again become parishioners of Saint-Félix-de-Valois. Currently, there are three French language parishes, Sainte-Croix, Saint-Félix-de-Valois and the Cocathédrale de la Nativité, serving the east end of Cornwall. However, with the changing demographics, fewer people attending church on a regular basis and a lack of French speaking priests, it had become clear that three Francophone parishes were no longer needed. After consultation over several years with both the parishioners of the affected parishes and the Council of Priests, Archbishop Terrence Prendergast, the Apostolic Administrator of the Diocese of Alexandria-Cornwall, made the difficult decision to close Sainte-Croix.

“Closing a parish is never an easy thing and causes pain to many,” said Archbishop Prendergast. “The parish church is where many of the most significant family events have taken place, baptisms, marriages, funerals, so it’s a hard thing to see the building close. It is my great hope that the reunification of these two parishes will allow for one vibrant parish with stronger evangelization and faith formation, as well as an effective administration and stewardship of the resources of the unified parish.”

The future use of the church building will be determined in the coming months.

Support your community and local news.

Email info@cornwallfreenews.com to find out how easy it is!