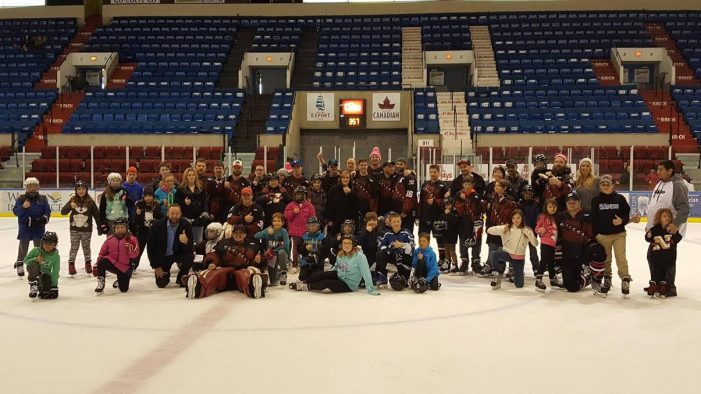 CORNWALL ONTARIO  – The Watertown Wolves skated to a 4-2 victory over the Cornwall Nationals on Sunday afternoon at the Civic Complex in front of 680 fans.

It was a rough weekend for the expansion Nationals, who lost all three Federal Hockey League games played.

Former Cornwall forward Jason Dolgy opened the scoring for Watertown at 13:15 of the first period when he capitalized on a turnover at the Nationals blueline and beat Paul Bourbeau Jr.

Watertown captain, and Long Sault native, Brett Liscomb then beat a sprawling Bourbeau Jr. to give the Wolves a 2-0 lead at 3:14 of the first.

Darick Ste Marie gave Cornwall some life with a blast off the post and in with only 13.2 seconds to play in the opening period.

The Nationals leveled the score when Storm Adams banked an intended pass off a Watertown defenceman and past goaltender Danila Alistratov at 16:10 of the second.

But the Wolves regained their lead when Jesse Facchini, which turned out to be the game winner, buried a Liscomb pass with 35.7 seconds to play in the middle frame.

Colin Mcintosh iced it with an empty netter with 1:05 to play.

Immediately after the game, fans of all ages took to the ice to skate with their favourite Nationals players.

Cornwall is back in action next weekend with a home-and-home against the Danbury Titans. On Thursday, Feb. 23, the Nationals visit Danbury (7:15 p.m.) before two teams collide once again on Sunday, Feb. 26 at the Civic Complex. The puck drops at 3 p.m.

CHALLENGE ACCEPTED: Cornwall fans once again showed their generosity on Sunday by donating a total of 106 jars of peanut butter. The Nationals, who challenged their fans with a goal of 100 jars, will donate the peanut butter to The Agape Centre of Cornwall.

BERLIN 4, CORNWALL 3: At Berlin on Friday night, Dominik Synek’s goal at 9:34 of the third period proved to be the difference as the River Drivers edged the Nationals 4-3. Adams, Brock Bissonnette and Sylvester Bzdyl had the Cornwall markers. Francis Dupuis took the loss in goal for the Nationals, despite a 32-save performance.

WATERTOWN 5, CORNWALL 1: At Watertown on Saturday night, Colin Mcintosh had a pair of goals to lead the Wolves to a 5-1 victory over the Nationals. Adams, with his fourth goal in five games for Cornwall, had the lone marker for the Nationals. Bourbeau Jr. was tagged with the loss in the Cornwall crease.

Please Support CFN & the Nats & Click the DONATE button below!