How Widespread is Conflict of Interest in Cornwall Ontario? By Jamie Gilcig 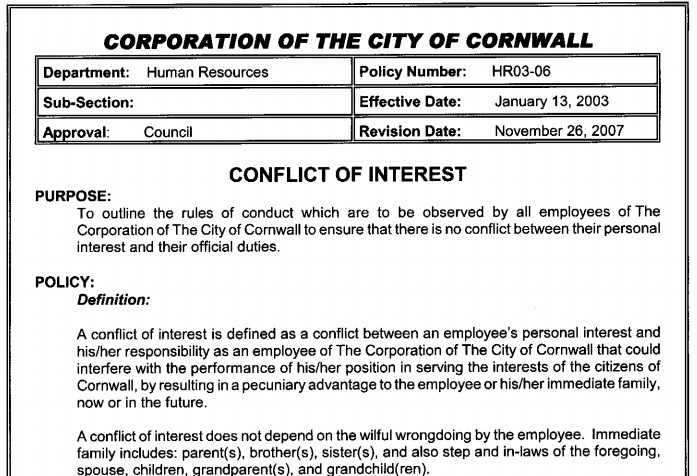 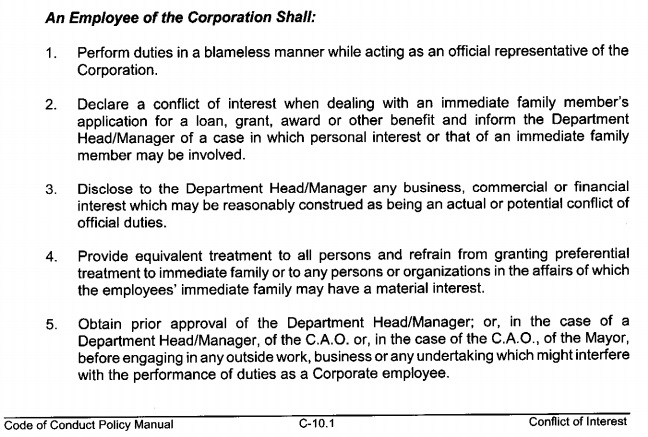 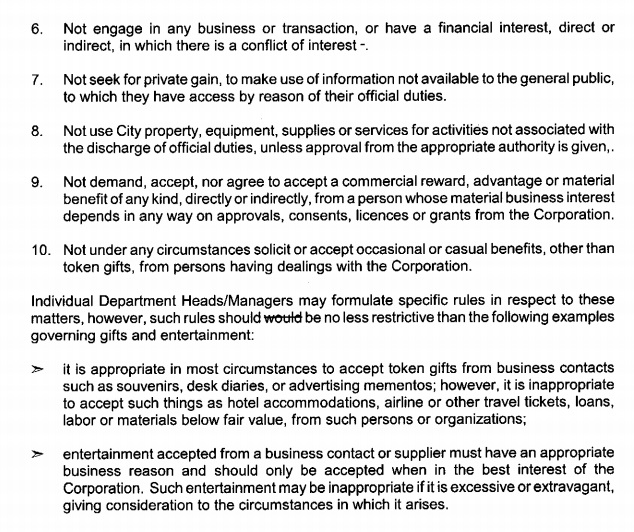 CFN – Ageism.   It’s wrong; but sometimes there can be grains of truth in cliches.  Sadly Cornwall Council voted to keep Fluoride in our drinking water.    Fluoride is poison; but of course many poisons have been used as medicine.  In this case many municipalities and regions around the world are saying that this toxic soup is not medicinal in anyway.

Of course our own Dr. Paul Roumeliotis of the Eastern Ontario Health Unit reputes that so his “good friend” Mayor Bob Kilger pushes a button and with a wave of his gavel his coven of sycophantic councilors vote to keep poisoning the public.

It makes me feel….conflicted…which is good as that’s the basis of this piece.

Conflict of Interest in Cornwall Ontario.    Not just the Mayor’s.    So I decided to print the city’s own policy which is aimed at staff. I know.  Dear Viewers you think I’m talking about Mayor Kilger again and allegations that he used his authority to somehow help his son, former NHL player Chad Kilger get a gig with our Fire Department. Ah but dear viewers I am not directly writing about our Mayor right now.  He has enough on his plate.

What if we had a city department though where a large chunk of staff had their own businesses…related to….. the nature of the department they worked for?   Would that be conflict of interest and what would the remedies be?

Imagine further that the city itself had tenders with some of said companies even though some of the partners and principals were in fact working for the city?

That would sorta kinda put them in conflict, no?  Could that be why our mayor is getting a free pass on his own conflict?

Speaking with one labour expert they suggested that the real issue would be the managers who are supposed to know their own policies and bylaws.   Yes the employee would be violating unknowingly.  Several I spoke with have such businesses protested that so many others did that they never thought that they were violating any rules as it certainly wasn’t their intentions.  They also asked how could one of them be prosecuted or sanctioned when so many were doing it?  Selective justice doesn’t work.

And of course who signed this into law?   Mayor Bob Kilger and former CAO Paul Fitzpatrick.

You just can’t make stuff like this up.   Mr. Fitzpatrick of course, himself the route of an estimated $3M in legal fees, settlements, payoffs was given nearly a year of “executive leave” whatever that is before being allowed to retire.

The mayor is spending huge chunks of money covering up said scandals while fending off having to admit his own conflict of interest.

How on earth could you hold anyone working in any city department to the fire for their own conflict of interest when city managers are allegedly giving out contracts to companies owned by city employees?

Imagine.  The awesome woman that mops up City Hall, if elected to council, would have to give up her job; but these games go on behind closed doors.

And they wonder why our taxes went up 2.88% this year?   And of course the city paid for Mr. Fitzpatrick’s legal bills even though they declared guilty on the Diane Shay case while refusing to pay her whistleblowing legal bills!

Please consider becoming a Subscriber to CFN.    Your subscription donation help keep the lights on!

If you support Independent Free Media just click the banner below.

How Widespread is Conflict of Interest in Cornwall Ontario? By Jamie Gilcig added by admin on October 19, 2017
View all posts by admin →

One Response to "How Widespread is Conflict of Interest in Cornwall Ontario? By Jamie Gilcig"