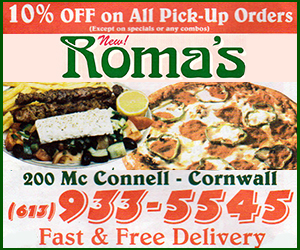 Cornwall Ontario – As council argues over whether to cut pizza and pop for committee meetings CFN has discovered that the City rents space above Gordon’s Jewellers on 2nd and Pitt so drivers can use the loo or take a lunch break.

Of course if they break there where would they leave their buses?

The contract, which is a five year commercial lease starting in 2017, as the city is paying HST, makes little to no sense.

Clearly Cornwall Transit and the City have alternatives within their own base.   For example, the hub could be at the Civic Complex allowing for washroom space.

CFN contacted the City of Ottawa and OC Transpo and asked if they rented such facilities?

No, OC Transpo does not rent nor manage private apartments or other commercial spaces that are not part of its regular operations.  OC Transpo does have operator facilities for the purposes of taking a break or using a washroom at major stations and connection points along the Transitway and bus route network.

Ironically, before the City cut funding to its public art gallery there was a request for assistance to purchase the building which also included the restaurant (now closed) across from the second story apartment now rented, which also had a two room space with washroom above the restaurant.  IE, instead of investing in the city and securing the future of the public art gallery and serving the bus drivers, the city chose to see its public gallery close and rent space.

Len Tapp, Cornwall Transit poobah confirmed via email that there are no other spaces rented by the City for this purpose.   He stated that the space is in fact zoned commercial and not residential, and further suggested that the space was covered under the city’s umbrella insurance and that the space included:

Janitorial services are provided as part of the agreement at rate agreed upon by the City and the Lessor .

What do you think dear CFN viewers?  Is this a wise expense in light of the budget cuts?  You can post your comments below.