“I strongly deny the groping allegation that I already admitted to and apologized for.”

WARRENKINSELLA.COM – That is Justin Trudeau’s defence in the ongoing groping scandal, basically. And it is so truly pathetic, so fucking ludicrous, satirical news show The Beaverton ridiculed it with that very headline. The shifting, shifty prevarications of the Prime Minister of Canada have become a global punchline.

So, on Saturday, assorted trolls sent me super-mean messages.  All of them seemed to have less than 50 followers, all of them had fake names, and all of them used fake portrait photos.  Not a few of them went after my wife when they couldn’t get a rise out of me; one even seemed to suggest my wife should get raped to teach her a lesson.

Here’s representative sample of the barrage of hate: 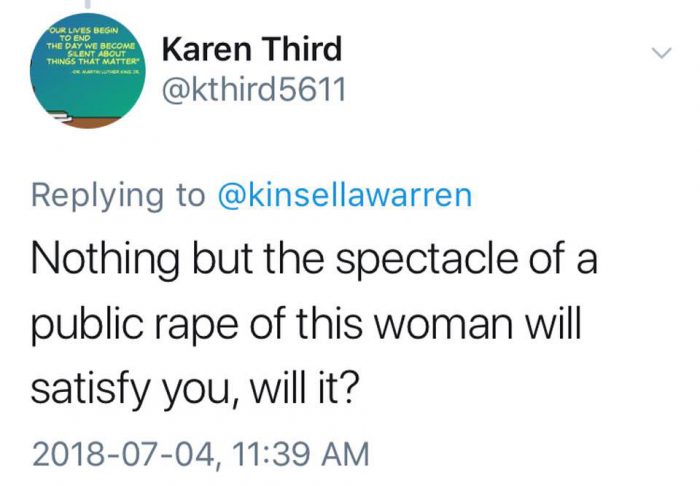 Abruptly, the nastiness stopped on Sunday.  Perhaps the 22-year-old who was overseeing the astroturfing – in a windowless, basement office at Langevin Block, under a photo of her boss jogging shirtless at Toronto’s Cherry Beach, on the very day that his judgment was being questioned from coast to coast to coast – went home to rest up before spending another few million on social media “outreach.”  I anticipate she’ll be back at it this week, once again circulating pleadings from my divorce because, you know, it’s 2018.

Before I blocked them, I observed that the trolls were accusing Yours Truly, and not a few other commentators, of “doxxing” Trudeau’s groping victim.  This is was a shitty little lie, of course.  I thought the CBC’s Robyn Urback dealt with it rather well in a column that appeared Sunday night:

“…this is not a situation where an incident was dug up out of nowhere and put on the public record without the woman’s permission. For better or worse, this encounter was already on the public record in the form of a published, public editorial. The suggestion that we put the genie back in the bottle now is moot.

Ironically, there is at least one recent occasion when a private allegation was put on the public record without the complainants’ express permission: That is, in late 2014 when Trudeau went public with allegations against MPs Scott Andrews and Massimo Pacetti, without telling the women involved — two NDP MPs — in advance. The women felt blindsided, according to the NDP whip at the time.

Trudeau is himself therefore guilty of publicizing a misconduct allegation without the complainants’ permission, which makes the suggestion that we now drop the matter concerning the prime minister’s conduct — conduct that was already put on the public record — rather rich. It’s that conspicuous double-standard, rearing its head again.”

Anyway.  A nice reporter contacted me on Sunday, when I was in the middle of the woods with one of my sons, to simply ask me why I thought the editorial Rose Knight wrote in the Creston Valley Advance came up at all – and why, presumably, someone sent it to me.  I told her I didn’t want to speak on the record, because the threats and abuse were getting to be a bit much.

But I did tell her this:

“[Rose Knight’s editorial] was sent to me on the same afternoon the Hehr judgment came down (the decision, not the report – that’s regrettably still secret). I asked my source if there was a connection – ie., if Hehr is out of cabinet for long-ago inappropriate conduct out West, but Trudeau isn’t for the same thing – and the source said yes.”

The reporter suggested to me that some Ottawa Liberals were behind the effort to shine a spotlight on Trudeau’s misconduct.  I specifically did not answer that.

But I added this:

“Whoever sent it to me was waiting for the Hehr decision. And I presume they chose me because I had been very active in helping [one of Hehr’s targets,] Kristin Raworth.”

Did my source(s) send the now-world-famous editorial to me because I am no fan of Justin Trudeau?  Well, duh.  Obviously.  But I suspect my small connection to the Kent Hehr scandal was part of it, too.

(And, I would also hope, she/they know(s) that I have received information about a similarly hypocritical Conservative leader, too.  But that information will not become public until the woman in question goes public, as Rose Knight did with her August 2000 editorial.  These stories belong to the victims, as I’ve written many times.  Not anyone else.)

Anyway.  As of Friday night – when (a) Rose Knight issued a statement re-affirming that Justin Trudeau groped her and (b) put her name to it – the issue is no longer if Justin groped Rose: he did.  It was the issue, but now the issue has become something elseentirely. It’s that Justin Trudeau is now inarguably, irreducibly this:

Warren Kinsella was kind enough to allow CFN to re publish his column.   For more of his writings you can visit his website Warrenkinsella.com