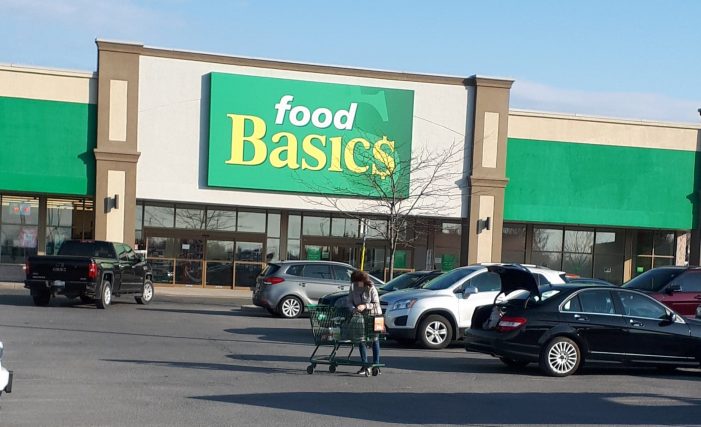 APRIL 20, 2020 – It’s boggling that an entity that is supposed to serve public health is boycotting this newspaper and refusing to release info that supposedly is meant to save and protect lives.

That’s exactly what Dr. Paul Roumeliotis is doing. While many can understand that people don’t like criticism, when you earn over $300,000 in tax payer money, which myself and family are a part of, it’s simply part of your job.

No matter how much people like Paul and Mayor Clement may not like the messenger, surely they can’t hate the thousands that read this newspaper daily?

For that reason alone both should be removed from their positions because their job is to serve the public and all of the public.

This Food Basic’s mess simply rams home the inner incompetence and ignorance that fuel these two and their enablers.

A worker at Food Basics was tested for COVID at CCH. The worker instead of shutting things down; essentially went back to work possibly infecting hundreds if not thousands of people. Subsequently their test came back positive.

As Ms Dion put it square on the head. This one act of ignorance and a break down of Pandemic protocal may be a death sentence for people who were following the rules.

And they won’t know apparently until they are sick, which is for as many as 20%, too late.

Food Basics re opened the store Sunday morning with no notice of what happened. CFN had some viewers canvassing customers as they entered and exited the store, most were seniors and most had no idea of what had occurred, nor were they wearing masks or any PPE. News is not like it was 50 years ago, and many seniors are not on the internet as much as younger people which is why it is utterly critical to get all media outlets on board in a public health crisis.

We know that many other stores have incidents like this and were not able to get “deep” cleaning done in such a short period of time. The quote below is from the CDC in the US:

Lastly, the US Centers for Disease Control and Prevention (CDC) has specific recommendations for when a COVID-19 case has been confirmed in your facility. These recommendations include:

Again, the point person on this is the Public Health Officer. Why on freaking earth would he allow the store to be open so soon? The Tim Horton’s that had a COVID 19 Confirmation didn’t open the next day?

Mr. Roumeliotis stated that if workers are sick they should stay home. We have known for months now that people can be asymptomatic and being infections and even super carriers. This simply is not enough. It’s frankly going to endanger the public and lead to guaranteed spread and illness.

In his video he quotes the airline industry, but that industry is very clear. If you come into close contact with a confirmed case you stay home for 14 days regardless if you show symptoms or not. So Paul is either incorrect or purposely lying and one would think that a $300K per year public officer with a media relations person and other staff would be up to date and factual on a Pandemic that will define a century?

Workers from Food Basics contacted CFN alleging that many of them will not be returning for fear of COVID. They stated that they were told to return to work and only stay home if they showed signs of illness. Several stated over 50 workers were told this, IE the COVID confirmed worker has been exposed to approximately 50 other staff. And each of those people have been in contact with other staff and clients, as well as their family. This can have deadly results. Can you imagine a cashier, food handler, or person that wipes your carts being contagious and how many people they are exposed to during a shift?

Can we really afford to wait until people are sick to try and stem the flow of illness? In nearby Vaudreuil Dorion the city told residents that attended the store when their Costco became infected to self isolate for 14 days.

What We Don’t Know:

CFN was given an name alleged to be the worker in question. We spoke to their spouse who certainly didn’t clarify that the person in question wasn’t the Food Basic worker. These allegations have been published far and wide on social media.

Dr. Paul did not state that there is no connection to the Tim Horton’s infection and the Food Basics one. If this person is the same party they have another family member working at Walmart. This is not good for disease prevention.

If the person is connected to the Tim Horton’s worker that’s a huge fail by the EOHU. In speaking to people who’ve been tested they are clearly told who has to stay home and who doesn’t. They make daily check ins with those tested as well. This case is starting to look like a complete break down of protocol.

If this was the victim refusing to follow the rules they need to be charged and exposed so that we can stem possible infection of others.

The EOHU handed out a $880 fine to a local convenience store recently. Why is Food Basics seeming to get a free pass? Why was it open Sunday? Why are workers who were exposed serving the public while potentially infectious?

Why are the media are not asking the real questions? Only they can answer this, but it’s very clear that the one media outlet, this one, that asks the real hard questions is being blocked from doing so at the public’s health risk.

Everyone should be frightened by that.

And where is the province in this mess? You just can’t spin everything. At some point good luck runs out, and we end up with a hot spot.

Cornwall cannot afford to be a hot spot.

Premier Ford at this point knows about Cornwall and what is happening and it’s time the Ministry of Health and his office steps in and makes sure that our truly limited resources in this area function to their full capacity to save as many lives and possible and resources to our system.

We need a Public Health Officer that is up to the task at hand. Paul Roumeliotis clearly is not that person.