It’s that time again.   The last Friday of every month Cafe Connectionz hosts a LIVE MIKE night where people can show what they can do!    Come enjoy the super environment and amazing beverages and baked goods! It’s Free!  It’s all ages.  It’s good coffee.  Cafe Connectionz is at 407 Water Street East, near […]

We’re testing our online radio station this evening  from 7:00pm.  If you want to have us call you to speak on the air email us at info@cornwallfreenews.com and we’ll try and slot you in.   Local community radio can be a lot of fun and we’re fully Socan licensed so we can take musical requests […]

Cornwall Ontario – At 4pm this afternoon Dr. Conrad Murray arrived at an L.A county courthouse to turn himself in on charges related to Michael Jackson’s death. It is expected that Murray will be charged with involuntary manslaughter, this comes seven months after the death of M.J. Since the King of Pop’s untimely death last […]

Winterfest is Here! Are you suffering from the mid February blues? The city of Cornwall has a remedy in the form of the 3rd annual Cogeco Winterfest Carnaval. “This year promises to be yet another great success with a wonderful line up of activities and entertainment” said City Councillor Kim Baird, “The carnaval is a […]

“Okay, so most people’s idea of romance isn’t a chubby, winged toddler in a loincloth coming at you with a crossbow. Still, Cupid is never wrong, and a fine way to celebrate his big day is by joining us for our Blue Valentine Party on Saturday, February 13th. We’ll be back in the Heritage Room […]

Local Band on the Rise Local “punk rock and ska” band Winston Marley will be at Dream Builder’s Studios this Friday. They will be recording two tracks that will be used for fishrizzo production’s film “10 Days Across Canada”.  Previous projects by fishrizzo include 86400 and Treasures of the Lost Villages. Winston Marley has been […]

It’s that time of the month people.   Café Connectionz hosts their Friday Night Open Mic night the last Friday of each month. This month features Keegan Larose and friends Jason Setnyk, Cody Zulinski, and Tricia Lee Robinson.   FACEBOOK PAGE Open Mic is free to the public, but buy some bevvy’s and yummies so that […]

Canadian award winning Children’s recording artists and entertainers Splash N Boots are here in Cornwall Ontario recording a new music video at Dream Builder Studios.  The team also recently won Canadian Children’s Group of the Year. The pair have been busy performing all over the globe; even performing in Australia with Kids Legends, The Wiggles. […] 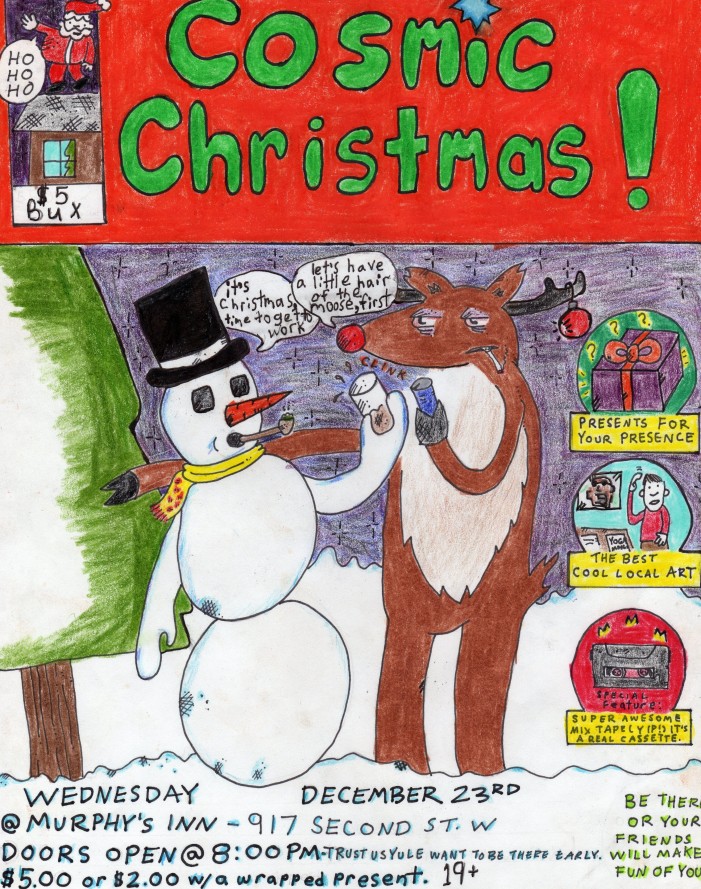 And they say the youth of Cornwall have nothing to do!    The Cornwall Free News is proud to be a Media Sponsor for COSMIC CHRISTMAS! First Annual Independent Art and Music Event takes place December 23rd at Murphy’s Inn Join old and new friends at this year’s Cosmic Christmas, Cornwall’s totally local independent art […]

By admin on December 14, 2009   Community, Entertainment, Music, What's Going On

SPIRIT OF A SEASON MUSIC FESTIVAL ALL AGES!!!!!!!!!!!! Featuring 14 Acts over Two nights!!!! $4 dollar pints of Sleeman NO sectioned off drinking section (free for all 😉 Indie Guitar Company raffling off guitars both nights 8000 watt PA with pro sound guys and pretty lights Mc’s & Dj’s 400+ person capacity for you and […]

14 year old Jayhead Saade is still cranking out the tunes and emitting radiation from the top of his dad’s hotel in Greeley Ontario despite a second hand delivered notification to cease from Industry Canada and threats of up to $5,000 per day in fines. L I N K “Saade’s father, Georges Saade, is a […]

Todd Snider – Enjoy Yourself – So I was listening to KPIG….

So I was listening to KPIG this morning.   I thought what a wonderful song.   Here is a clip of it from You Tube and of course we suggest if you like it you purchase the download or visit his website. httpv://www.youtube.com/watch?v=xj0AF34QIBo&feature=player_embedded please visit our sponsors:

Are you a part of the Cornwall Ontario Music scene? We want you!

We’re looking for someone to cover the Cornwall Ontario & area music scene.  The who, the what, the why, and most importantly the WHERE!    If you feel you’re the right person email us at info@cornwallfreenews.com please visit our sponsors: