CFN –  Gruesome weather couldn’t kill that Heavy Rock n Roll vibe in Cornwall Ontario as the Russ Dwarf and the Killer Dwarfs shook La Maison with people attending as far away as Ottawa. Cornwall’s Promoter Supremo, Jeff Brunet of Alkaline, sent in the following:   I’d would like to thank you all for braving […]

CFN – We had a real treat Saturday night when two fabulously talented musicians took the stage in Morrisburg. The stage was sold out again. Graham Greer, a well recognized local talent and new Communications Coordinator for the Aultsville Theatre, went on first and entertained the audience with his casual banter and flawless renditions of […]

CFN – This past Saturday, Dec 3 2011, The St. Lawrence Acoustic Sound Stage hosted something a little different, a night of jazz. At least it was different from what I have encountered there. And I would have encountered it on Sturday if I wasn’t at the Ingleside Tree Lighting Ceremony. Unfortunately I couldn’t be […]

CFN – When Eric Willison talks about his band The Shiners, it’s hard to not to imagine what would happen to the roots-rock group if they were to get that “proverbial” break. Certainly the band has paid its dues, working hundreds of gigs and lending their music to charity compilation CDs and movies.  Still, it […]

CFN – This past Saturday night the St. Lawrence Acoustic Stage in Morrisburg presented another fantastic evening of music on stage as well as a display of visual artists in the hallway. The performance on this night included 6 “emerging artists” who each performed 3 songs, starting with a CFN favourite, Mélanie Brûlée formerly of […] 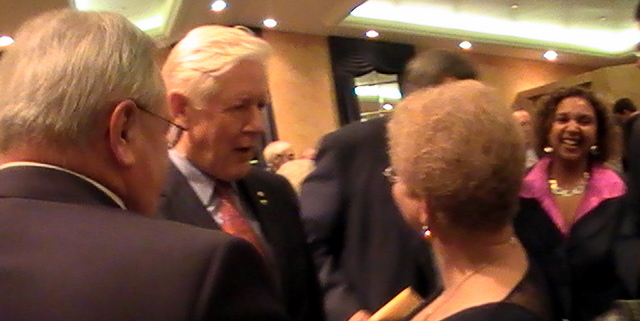 CFN – George Bowser and Rick Blue, better known as Bowser and Blue were in Cornwall, Ontario yesterday evening.  This musical, comedic, Canadian dynamic duo from Quebec were invited guests for a fundraiser benefiting Crime Stoppers.  The image featured here pictures a Cornwall audience member who was invited on stage to demonstrate the game of “bum darts”.    The “bum dart” song sure […]

CFN – This months performances at the St. Lawrence Acoustic Stage once again included some great Canadian talent in the form of Del Barber and Brea Lawrenson. Brea Lawrenson is a 24 year old singer-songwriter who shows plenty of poise, determination and confidence on the stage. This is a return engagement for Brea and since […]

Can you believe Nirvana’s Never Mind Album was 20 years ago??

CFN –  Do you feel old?  Yes, that’s the original child from the 1992 Nirvana album Nevermind. It’s amazing how time flies….

CFN – On Saturday night another season of excellent acoustic music began at the St. Lawrence Stage. It was standing room only because the headline act was none other than multiple Juno award winner Serena Ryder. . Actually this was the first sold out concert for the stage. I know that I was excited to […]

CFN –  Good Morning – Your newest morning show is LIVE on Seawayradio.com starting at 9:00 AM.   This morning’s guests are Liberal Candidate Mark A MacDonald and Singer, Songwriter, and grower of interesting facial hair; Graham Greer! You never know who’ll pop on to Seawayradio.com!  Your community radio station online across Canada! News, Views, […]

Cornwall ON – September 5th marked what would’ve been the 65th birthday of the late and very great Freddie Mercury; lead singer of Queen.   I’m not sure if it was his dying so young or simply his burning legacy that inspired so many musical talents after him. httpv://www.youtube.com/watch?v=Uuqx11UOOP4&list=PL3C1EFC4D34B2C5DC&index=1&feature=plpp Freddie was the King of the […]

Cornwall ON – Music Promoter Jeff Brunet delivered Holly Woods and Toronto as they rocked the house in Cornwall Ontario –    The popular band from the 80’s blasted it out for nearly two hours with a full house showing their appreciation. httpv://www.youtube.com/watch?v=5Q_eRqcFTHk Ms Woods showed she still had the chops as she delivered hit […]

Cornwall ON – Poverty Free Ontario (PFO) is working in more than 20 communities across the province, including Cornwall and the SD&SG area, to make sure that the issue of poverty is part of the upcoming election debate and the Social Development Council of Cornwall and area’s Poverty Working Group members invite everyone to participate! […]

Akwesasne – It’s that time of the year!   The Akwesasne Pow Wow takes place September 10th & 11th at the A’nowara’ko:wa Arena on Cornwall Island!   A true family event full of music, colour, and tradition!   Whether watching the Dances, sampling the traditional Native foods or shopping at the marketplace the Pow Wow offers […]

Cornwall ON –  Today is the 34th Anniversary of Elvis Presley’s death.  That means that the lovely young lady I dined with last week at Eight Zero Zero was three years shy of being born at the time that the King of Rock and Roll toddled off of his toilet and allegedly embraced his eternal […]