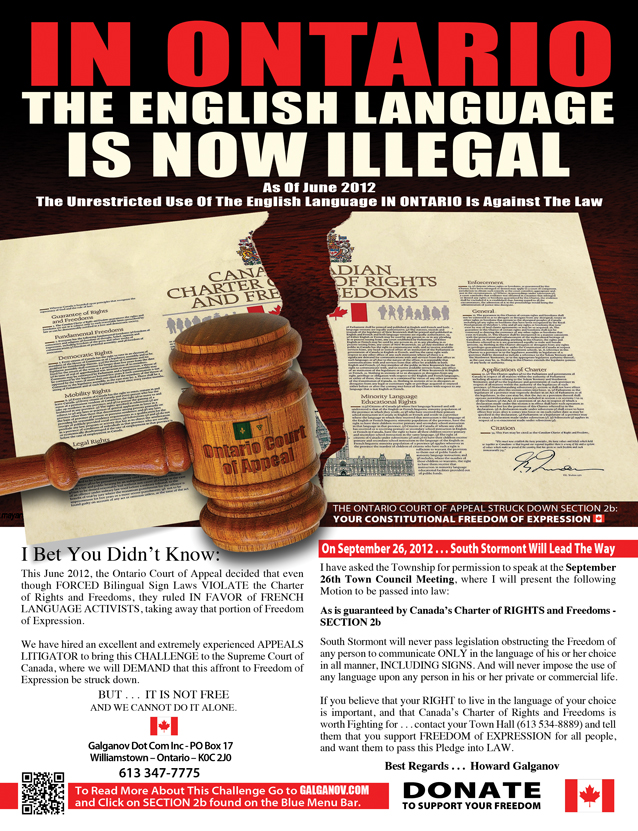 This is history in the making and too important to pass up.  South Stormont Council anticipates raising the bar for Ontario and for the rest of Canada at its September 26th meeting.  Council will vote on a ground-breaking resolution to honour a section of Canada’s Charter of Rights and Freedoms by committing itself NEVER to infringe upon citizens right of freedom of expression with regard to choice of language.  In June of this year, the Ontario Court of Appeal ruled that it was appropropriate to allow municipalities to violate this same right by forcing businesses to post signs in both English and French regardless of who the business’ clients are and regardless of whether or not the business owner and staff are able to speak both English and French.  This ruling even applies to specialty markets which cater to immigrants whose mother tongue is neither French nor English.

Your inalienable right to live in the language of your choice is being violated!

Don’t leave it to others to stand up for your rights – before it’s too late come and show your support by your presence.  Please join us at the South Stormont Council Chambers (next to the Long Sault O.P.P. station) at 2 Mille Roches Road.  The meeting will begin promptly at 7 p.m.

Please, especially those of you who live in South Stormont, contact the township office and/or the Councillors to let them know that you want them to preserve our freedoms.

WE DID IT – COUNCIL AGREED – NO SPECIAL STATUS FOR SPECIAL INTERESTS
Read about it here and here!

174 Responses to "Stand up for your language rights! Howard Galganov to Appear Before South Stormont Council September 26, 2012"