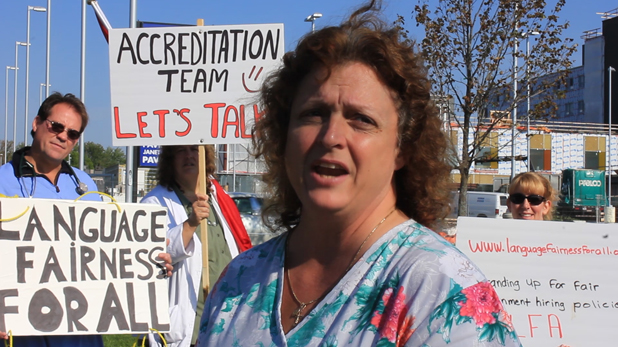 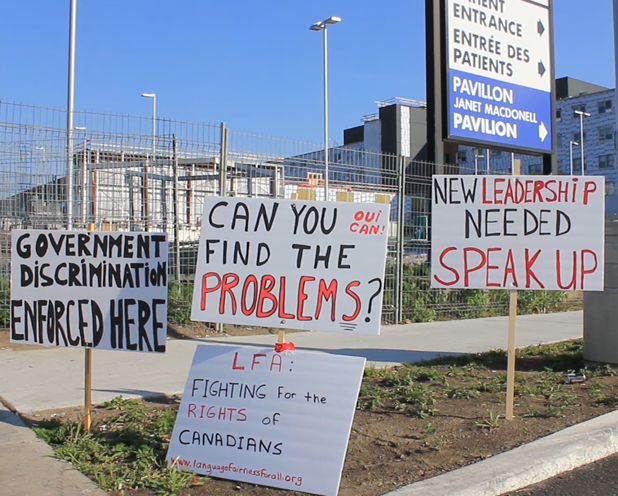 CFN – Bright and early last Monday morning, some members and supporters of the area’s Language Fairness for All group descended upon Cornwall Community Hospital in a demonstration designed to coincide with a three day hospital accreditation site visit. CCH Board Chairperson Helene Periard escorted the four member inspection team onto the site as the Accreditation Canada group from Quebec proceeded past the latest in a series of LFA “Acts of Activism”, this one right in front of the hospital.

As is often the case at these gatherings, many drivers waved and/or honked horns as a show of support for the group’s efforts to highlight inequities in hiring practices which highly favour Francophones in a country whose vast majority is English speaking. Cornwall Police were summoned mid-morning and LFA spokesperson Chris Cameron was asked to ensure that no signs created a hazard to those entering/exiting the hospital lot by obstructing view. Acting upon a recent recommendation, the LFA group provided coffee and Timbits to anyone wishing to avail themselves of the morning snack. It was envisaged that some hospital staff might be inclined to join the protest during break time were it not necessary to lose out on the break itself.

One CCH nurse who joined the group on her break used the time to speak on camera with CFN. Darlene Walsh who, after working part-time at the hospital for the past 18 years, was just recently awarded a full-time position.

Walsh spoke passionately on the topic of the quality of patient care transcending linguistic differences. Visibly upset about the impact on patients, she also addressed the issue of hospital cleanliness and overcrowding. An apparent common practice is to place patients in hospital hallways for days at a time. Some of these patients, she reports, require enemas, which are conducted behind a screen in the busy hallways, affording very little dignity to the patients. She couldn’t help but observe that the hospital had been cleaned and hallways cleared of patients just in time for the site visit. We’ll let you hear Darlene in her own words in our video clip.

“Language Police” at Cornwall Tim Hortons?
On Saturday evening at the Tim Hortons on Brookdale near 13th Street, some regular customers found it impossible not to take note of a needlessly lengthy dialogue which caused a considerable delay in service. The conversation was in French and the “customer” was quizzing the clerk at length about just how French she is, which is her first language, how comfortable she is in dealing in French, does she prefer to converse in one language or the other, does she generally address people in English first, etc, etc. How do you say Timbit in French? Have the language police come to Cornwall now?

South Stormont Council Leading the Way?
It should be interesting to witness the exchange at the South Stormont Council meeting tomorrow evening. Every major media outlet has been encouraged to provide coverage of what promises to be history in the making. After hearing a presentation from human rights activist Howard Galganov, Council is expected to vote on whether or not to make a formal commitment to always respect Canadians’ right to do business in the language of their choice, be it English, French, Chinese, Italian or anything else.