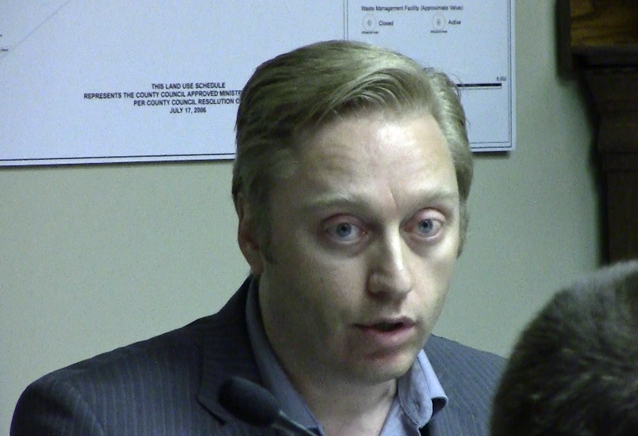 CFN – After reading CAO Derik Brandt’s report online late last week, it was no surprise that last night South Glengarry Council opted not to follow in the footsteps of South Stormont Council in pledging never to violate Canadians’ inalienable and Charter Freedom of Expression with regard to choice of language on signs.

In November, human rights activist Howard Galganov had asked Council to take note of the court-sanctioned infringement of business operators’ right to post signage in their language of choice and agree not to allow that to happen in his own municipality. Tonight’s non-vote was their response.

Brandt reported that: “South Glengarry is in a unique (?) situation in that we do not have a sign bylaw. And so, our current position is to allow the residents to express themselves in the language of their choice on signage. With regards to the Resolution, Council asked Administration to do an analysis of the Resolution and report back to Council. The results of the analysis are that the motion would be out of order and shouldn’t be put to Council. And that is primarily because 1.) the resolution is worded in the negative and resolutions shouldn’t be worded in the negative; the other is that it’s a re-affirmation of our existing position and re-affirmation motions are also out of order. I know that some people would like to have something like this passed in order to preserve our current position to let people use any language that they choose … There is nothing that Council is able to do to try to preserve our current position or make it more difficult for a future Council to change that. So, this resolution wouldn’t do that even if it was in order. There is also another part of the resolution that makes reference to a particular section of the Charter of Rights and Freedoms. We mention in the report that we don’t think that Council should be drawn into endorsing one section of the Charter of Rights and Freedoms. If you like, you can pass a resolution endorsing the entire Charter; Administration doesn’t recommend that primarily because you’re bound by the Charter whether you pass a resolution in support of it or not … So, at the end of the day, the resolution is out of order and it’s also not necessary to preserve the residents and businesses current right of being able to advertise in the language of their choice.”

Some would argue that recent history disproves Mr. Brandt’s claim. So far, four Ontario townships are imposing forced bilingualism (English/French) on exterior commercial signs, even if the business operators function in neither of those languages. A court has ruled that the bylaws infringe upon everyone’s right, English, French, Italian, Dutch, and everyone else since all are forced to post (only) in English and French even if they have no English or French clientele. And, a Superior Court judge has ruled that it’s o.k. to over-ride the Charter-guaranteed Freedom of Expression in order to advance a certain cause in Canada.

It also seemed ironic to some in attendance that Council voted in favour of a recommendation to not vote on the resolution after hearing that it’s out of order to vote on a resolution that’s worded in the negative. (Viewers might want to ponder that for a moment.)

It seems that some Francophone businesses and those responsible for public buildings are ignoring the bylaws and not being penalized for doing so, unlike the way that Russell Township treated Howard Galganov and Jean-Serge Brisson when they chose to post signs that were not fully bilingual. The men were fined by the township and ordered by the courts to pay. As we’ve reported previously, in Russell Township, apparently they’ve been meaning to get around to converting unilingual French signs for 30 years now. Also, a community entertainment facility in bilingual Embrun, which also provides day care services, was flaunting a new high tech French-only coming events sign until CFN and Canadians for Language Fairness (CLF) went public with that fact. Beth Trudeau of CLF reports that the centre has switched off the portion of their sign that was promoting upcoming events rather than opting to post bilingual messages. Viewers are reporting other cases of Francophone business operators posting new signs that are not fully bilingual in places like officially bilingual Casselman.

Outside of the Township offices after the Council meeting, Howard Galganov chatted entirely in French with the only identifiable Franco activist, Georgette Sauve, president of L’Association Canadienne-Francaise de l’Ontario (ACFO). They discussed the relatively small number of Francophones at the Council table. Sauve knew exactly who was fluent in French and who wasn’t. She identified herself as being a Francophone resident of the Township.

Sauve told Galganov that: “it’s not a question of language.” Galganov responded that: “If you want to post (a sign) in French only, that is your business; that is your freedom … For me it’s not a question of language; it’s a question of human rights.” Sauve insisted: “Mr. Galganov, we live in a free country. We are free! We are free!” Galganov continued: “Do I now have the right to post a sign in English only in Canada – any place in Canada? The use of the English language in Quebec is illegal! Right now, in at least four Ontario townships, the unrestricted use of the English language is illegal. This is NOT a free country!” It did not appear that Sauve wanted to hear that fact as she summarily dismissed him with: “It’s a question of point of view” as she left the site bidding him a good night.

Galganov took time to speak with us on-camera for the benefit of CFN viewers. He’s not surprised at last night’s non-decision and will be re-doubling his efforts to attain a greater degree of language fairness and respect of inalienable human rights and freedoms.

Chris Cameron, official spokesperson for Language Fairness for All, spoke with us about matters such as the UNESCO’s Guiding Principle of Respect for Human Rights and Fundamental Freedoms.