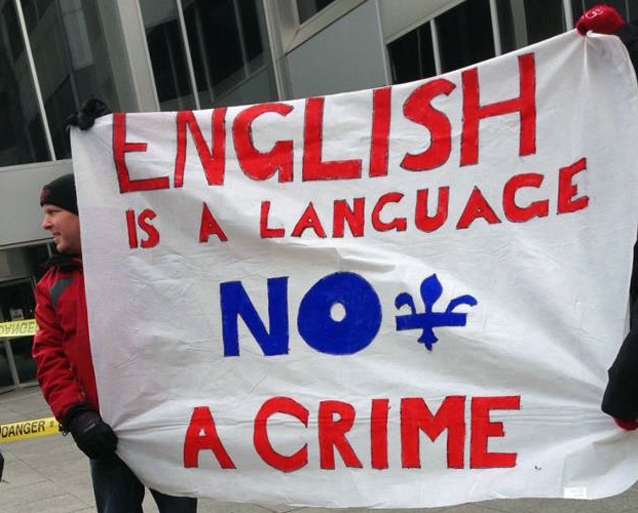 We as Canadians consider ourselves a fair and just society and often through diplomatic and military measures encourage and or enforce fair treatment of oppressed people abroad.

With our fair and just society promoting people’s rights abroad, why has our country permitted Quebec’s Bill 14 and its human rights violations?

Bill 14 is basically Bill 101 on steroids and its’extensive 33 pages of amendments of the French Language Charter and and Charter of Human Rights and Freedoms, is a slap in the face to people who believe in fairness.

I had the great opportunity to go to Montreal on Sunday Feb 17 and attend the protest rally against Bill 14 and meet many patriotic Quebec Canadians.

The rally drew approximately 400 people, many with signs denouncing Bill 14 and its potential impact on society. To me this was a proud moment when people stood up for their rights.

These people love their province but not the politics of the present government and their policies of division through language policies. Discrimination was a word frequently heard at the rally.

To those who, like me until recently, do not know the impact of Bill 14, I will address a small portion of these three areas: Human Rights, Education, Employers.

UNDER THE CHARTER OF THE FRENCH LANGUAGE -PREAMBLE

“Whereas the National Assembly intends to pursue this objective in a spirit of fairness and open-mindedness, respectful of the institutions of the English-speaking community of Québec, and respectful of the ethnic minorities, whose valuable contribution to the development of Québec it readily acknowledges”

Bill 14 changes “ETHNIC MINORITIES ” to Cultural communities -The changes may not seem like much but they are big changes.

Ethnicity and Minorities are defined under the Canadian charter of rights and under so their rights are covered .

Under the QUEBEC CHARTER OF HUMAN RIGHTS
#10 Every person has a right to full and equal recognition and exercise of his human rights and freedoms, without distinction, exclusion or preference based on race, colour, sex, pregnancy, sexual orientation, civil status, age except as provided by law, religion, political convictions, language, ethnic or national origin, social condition, a handicap or the use of any means to palliate a handicap.

Please take special note with regards to equal recognition of ethnicity and language and without distinction,clearly having recognized one language and the oppression of the English language in Quebec violates more then one of the charter of human rights.

-One must consider what is omitted here – So people do not have a right to receive an education in English?

#30 No Secondary Education or Diploma of College may be issued to a student who does not have a specified knowledge of spoken and written French as required by the minister of education.

#35 The professional orders shall not issue permits except to persons whose knowledge of the official language is appropriate to the practice of their profession with the completion of prescribed French courses.

Children’s enrollment in primary and secondary school must be in French unless proof is provided that one parent received their education in English only in the province of Quebec.

EMPLOYERS :
#47-An employer is PROHIBITED from requiring that a person have knowledge of a language other than French unless the nature of the person’s duties with the employer requires such knowledge.

#125.3-The employer must publicize the name of the person responsible for Francization within the enterprise as well and submit the linguistic situation analysis and reports and submit through ministers office forms.

#175-As part of inspection the person may examine any products goods labeling displays and take measurements to verify compliance.

Inspectors may require the production of any book, account, record, file or other documents for examination or for the purpose of making copies or extracts.

The inspector may seize anything which he or she believes on reasonable grounds may prove the commission of an offence under this act or the regulations.

#177-If the Office is of the opinion that this Act or a Regulation under this Act has been contravened, it shall refer the matter to the Director of CRIMINAL and Penal Prosecutions so that appropriate penal proceedings may be instituted where required.

This is but a few of the large number of stricter regulations put forward in bill 14.

I found this one comment to be very interesting and saw it a number of times -ref#32 ” The language policy shall specify the conditions and circumstances in which a language other than French may be used in accordance with the act, while emphasizing the importance of setting an example and of PREVENTING WIDESPREAD INSTITUTIONAL BILINGUALISM.”

The speakers in were:

Hugo Shebbeare of the Quebec Office Of The English Language:

All three gave their perspective on the Bill 14 Rally and how since the Morois Separatist Government has been elected, many not-so-nice changes have occurred.

Some have given personal perspectives on their treatment. The videos will certainly provide better insight into how these proud Quebec Canadians feel and why they stand up against oppression. It was an honour for me to stand with them .