The Cornwall Community Police Service is mourning the loss of a former Cornwall Police Officer. Cst. Mike Robillard was employed with Cornwall for almost five years when he went to the Ottawa Police Service. On November 17th, 2013 Cst. Robillard died as a result of a fatal traffic accident while on his way to work. Cornwall Chief of police Daniel Parkinson stated “Mike will be sorely missed by anyone who had the pleasure of working with him. His positive personal and work demeanor left an impression on many of us”. The Cornwall Community Police are extending condolences to Cst. Robillard’s family and friends.

The stop revealed that the 38yr old male driver (Anthony RYAN of Cornwall, On) was operating a vehicle under the influence of alcohol.

– Driving While Ability Impaired
– Driving with More than 80 mgs. of Alcohol in Blood

He is scheduled to appear 03Dec13 in Cornwall court.
(South Stormont) – On 17Nov13, at approximately 03:45am, SD&G OPP officers had occasion to conduct a traffic stop on Highway 401 South Stormont Township.

The stop revealed that the 25yr old male driver (Steve LACERTE of Longueuil, QC) was operating a vehicle under the influence of alcohol.

– Driving While Ability Impaired
– Driving with More than 80 mgs. Of Alcohol in Blood

He is scheduled to appear 24Dec13 in Cornwall court.
DOMESTIC INCIDENT

The 39yr old male was arrested and faces charges of:

He is scheduled to appear 10Dec13 in Cornwall court.
BREACHED CONDITIONS

(South Glengarry) – On 17Nov13, at approximately 10:00am, SD&G OPP officers had occasion to conduct a traffic stop on County Road 34, South Glengarry Township.

The stop revealed that the 35yr old male driver was breaching his earlier release conditions.

He is scheduled to appear 03Dec13 in Cornwall court.
BREAK AND ENTER

(North Dundas) – On 15Nov13, at approximately 08:30am, SD&G OPP officers responded to a report of a break and enter on Main St. Winchester, On.

The investigation revealed that sometime overnight unknown suspect(s) entered a local business and removed an undisclosed amount of cash.

On Monday, November 18, 2013, at 1 p.m., in the media gallery at police headquarters, Detective Sergeant Justin Vander Heyden will update the media on the investigation into Homicide #52/2013, and release video of the suspect and Persons of Interest.

The conference will be broadcast on Bell TOC and livestreamed to YouTube.com/TorontoPolice.

– an 81-year-old woman was attempting to cross St. Clair Avenue West, from the north side to the south side, near Deer Park Crescent, mid-block

– a 26-year-old man was operating a streetcar westbound on St. Clair Avenue West

– the pedestrian was struck by the streetcar, thrown into westbound traffic, then struck by a 2013 Mercedes Benz SUV driven by a 41-year-old man

The woman was taken to hospital with life-threatening injuries, where she later died.

Anyone with information is asked to contact police at 416-808-1900, Crime Stoppers anonymously at 416-222-TIPS (8477), online atwww.222tips.com, text TOR and your message to CRIMES (274637), or Leave A Tip on Facebook. Download the free Crime Stoppers Mobile App on iTunes, Google Play or Blackberry App World. 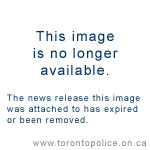 The Toronto Police Service is requesting the public’s assistance locating a wanted man.

Jamie Adam Simpson, 43, of Toronto, is wanted for:

A photograph of Jamie Adam Simpson has been released.

The 64-year-old pedestrian was taken to hospital with life-threatening injuries.

Preliminary information indicates the following:
• At approximately 10:45 p.m. on Sunday, November 17, 2013, police received a call that led officers with the Halton Regional Police Service to attend a residence on Oak Springs Road;
• Officers found a man seated in a vehicle a few houses away from the residence. The man exited the vehicle and there was an interaction. Officers discharged their firearms and the man was struck. His death was pronounced shortly after midnight.

On October 29, 2013, the female suspect walked into two local banks, one in the 900 block of Smyth Road and the second in the 1300 block of Richmond Road where she identified herself as someone who had lost her bank card. The suspect was successful in withdrawing $10 000.00 from a victim’s bank account.

The female is described as a Caucasian female, in her early 30’s with shoulder length brown hair, wearing black toque and a black coat and was English speaking.

The Ottawa Police Service Robbery Unit is seeking the public’s assistance in solving a series of south Ottawa robberies and is encouraging area residents to be vigilant.

From October 31, 2013 to date, at least eight (8) robberies have occurred in varying locations and at various times.  In five of the eight robberies, a handgun was produced.  In three (3) of the robberies, female victims were targeted.  The suspects have been demanding and obtaining cellular phones and personal effects, such as cash and purses.

The possibility of any number of these files being linked forms part of the ongoing investigation.  The following is a list of incidents under investigation from the area:

October 31 at 9:30pm Cahill Drive/Albion Road: a lone female was robbed of her bag by a lone male who was with 5-10 other males who lingered in the periphery.

To date there have been no injuries stemming from any of these incidents.

Descriptions have been limited and have varied but suspects are generally described as being black males ranging in ages from 16-22 year old.

The Ottawa Police Service has safety tips posted at the following site: