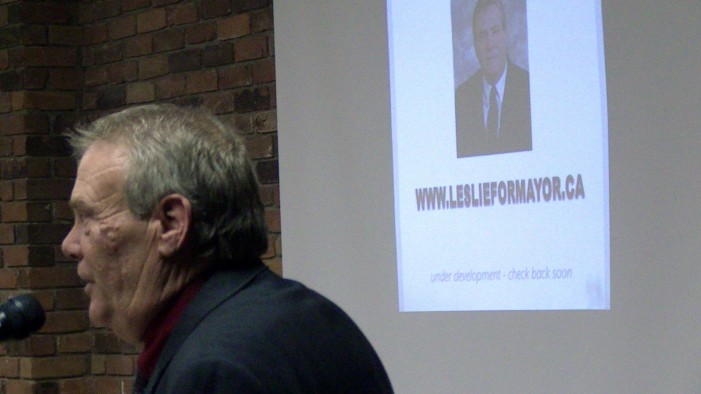 CORNWALL Ontario – Leslie O’Shaughnessy showed a little rust.  After all it’d been over a year since he left public office; but he warmed up as the capacity crowd at the Ramada In who listened to him talk about why he resigned in protest from his role as City Councilor of Cornwall Ontario and why he’s running for mayor.

On Bob Kilger Withholding councilors email, not once, but twice and outlining Elder Abuse at Glen Stor Dun Lodge as well as a councilor being intimidated at an in camera meeting as well as not getting written reports from Paul Fitzpatrick and management.

more on the Diane Shay case.

Walking out of closed door meetings unless a staff reported included – some council members knew more than others – Cornwall did not terminate Donna Derouchie , but settled; refused to vote on issue – city changed plea to guilty over Shay with one page report – $850K spent in closed door meeting in that one page report filled with “crap” – Kilger instructions to tell public change to guilty plea over costs – tells Kilger he would state that it was because we were guilty – Kilger never stated to public that insurance would have covered if victorious in court ; no cost to city – instance of abuse at GSDL reported late – Kilger acused Leslie of changing information – closed door session info provided confirming ministry statement of abuse.

Kilger owed the public the truth – Kilger lied – letter from 2009 turned his stomach – not one, but two investigations – Kilger did not follow instructions from council – Kilger lied to the city lawyer – Robert Menagh – Kilger talked new HR direction – no new direction ever presented to council – Leslie’s public apology to Diane Shay – Could not believe the city could do that to an individual – Menagh was scapegoat, another story to be told.

Was ready to resign – could no longer trust information recieved – admits should have left in Dec 2011 – would not touch on the illegal meetings that the public was not notifed for – mentions Cornwall Free News – City to take legal action to get CFN shut down – agreed that story we were print was what he had heard – lawyers and city “CFN nothing more than a blog” – lawsuit never happened – “how can the corp sue without council’s approval?” – City was paying lawyers to monitor CFN – “It didn’t cost much money” Kilger had no authority to do such a thing – Rivette interview on CFN – singled out at in camera meeting leading to Fournier investigation.

Diane Shay holding people accountable – the case needs to go to court and the truth be told – “you cannot fix something until you know how it’s broken ” – “my term on council from disappointment to disgust, to rage” – intimdation and bullying – “we bury it behind closed doors” – “it has to be talked about in the community” – more to come during the campaign – “if Diane Shay can go through six years of this, I can go for six weeks” – to Kilger “Debate the issues. This isn’t going to go away.” – Paying off Diane Shay is not the answer. Going to court is; but not at her expense.” – O’Shaughnessy Stakes Ground for Mayor’s Race – Declares It Is About Kilger’s Record – Sept 21,2014 added by admin on September 21, 2014
View all posts by admin →

29 Responses to "O’Shaughnessy Stakes Ground for Mayor’s Race – Declares It Is About Kilger’s Record – Sept 21,2014"