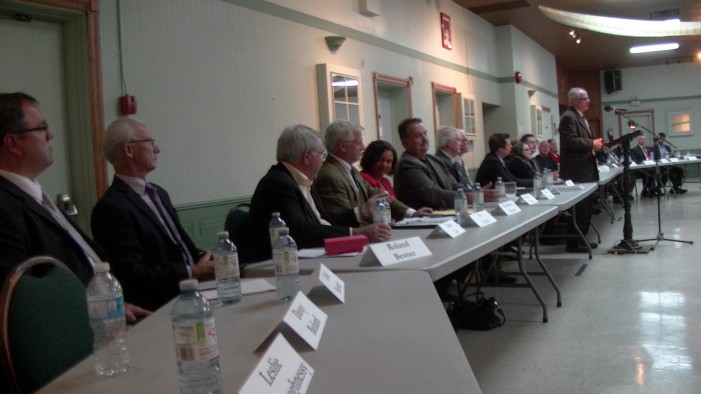 CORNWALL Ontario – One of the reasons why I feel we need a stringent conflict of interest policy at City Hall in Cornwall is what I call the Elaine MacDonald factor.

Ms MacDonald frankly is the most corrupt councilor we currently have.   She has long ago sold out her NDP principles in favor of her own political aspirations.

Example one would be two Provincial elections ago when she said she wouldn’t participate in the Five Day food challenge for Poverty Awareness while campaigning.   Of course the other candidates said they would because frankly; that’s what you’re supposed to say.  Rarely do any of the politicians actually do it!

Ms MacDonald actively stumps for Agape in open council even though she’s on the board.  She also has inveigled the mock arts council we have in Cornwall and somehow has taken control of the art gallery terrorizing poor Sylvie Lizotte in the process.

Asked about good long term union jobs being lost in Quebec and moving into a non unionized plant in Ontario and she sounds like she had been a minister in Mike Harris’ former government.

Elaine has had a long grip as President of the Labour Council here in Cornwall and of the local Provincial NDP riding associations.   One member of her team, Ian Wilson, said that if you weren’t a woman or gay you didn’t have much opportunity within her circles.    And of course the President of the Labour Council having access to city staff and confidential information when the city staff are unionized also seems like a gross conflict of interest.

As each election municipally occurs in Cornwall the Labour Council invites candidates to speak.

This year the call was put out before the closing date for candidates who had to submit answers to a questionnaire as the Council then endorses individuals.  They don’t put out a press release for the winners, but the circulate the names to their members and invite them to attend events.

That to this writer feels like gaming an election.  You can of course decide what you think it was; but sure enough the list of those endorsed was leaked to CFN.

Those endorsed were Ms MacDonald herself, Mayor Kilger, Syd Gardiner, Andre Rivette, and  her minions Carilyne Hebert & Alyssa Blais (who did not even attend the event) as well as newcomers Heather Megill and Guy St. Jean.  Mary Ann Hug, a PSW who knows a thing or two about Labour; was left off of the list.  At least one of those chosen allegedly didn’t even reply to their  questionnaire.

Asked for a copy of Mayor Kilger’s answers CFN was told by Louise Lanctot that they shread the entries after they decide who they pick.

Holy Watergate!  You’d think that those answer would be published, no?  Did Mayor Kilger even submit answers?

Here is the video from the three mayoral candidates who attended the Labour Council event.

We emailed all candidates this morning offering them an opportunity to post a comment in this story.  As of press time only Gary Samler had replied.  Mr. Samler is no stranger to labour politics being a long time NDP activist himself.

Two days before the CDLC debate at the Legion I wrote out a list of who I thought they would choose and be endorsing for this election and I placed my list in my lunchbox.

It is hard for me to understand how this group of labor minded people who run around screaming all year for fairness for our workers and blatantly be so unfair to most of the candidates in this election?

Their partisan glee list was already made up days before Sept 12th the deadline date for candidates to register. I attended this debate knowing full well who I believed had already been given their blessing and that this event was another shameful, disgusting display of partisan corruption going on by this biased band of hypocrites in our community and I would wish for this type of attitude and bad schoolyard behavior to stop if we are ever to grow as a community.

This endorsement was anything but fair to the candidates. Winning an endorsement from this group for me now is like winning Best leper at a Leper Colony.

And that is another nail in the coffin in why so many are calling this the dirtiest election of this century.   A local politician in Elaine MacDonald using her position with the Labour Council to game who wins an election. If that doesn’t reek like an extra on The Walking Dead nothing else does.

What do you think dear CFN viewers?  You can post your comments below and candidates that didn’t see the email prior to the deadline this Saturday can post a comment below.

Is Elaine MacDonald Using the Labour Council to Game the Election in Cornwall Ontario? added by admin on October 11, 2014
View all posts by admin →

19 Responses to "Is Elaine MacDonald Using the Labour Council to Game the Election in Cornwall Ontario?"