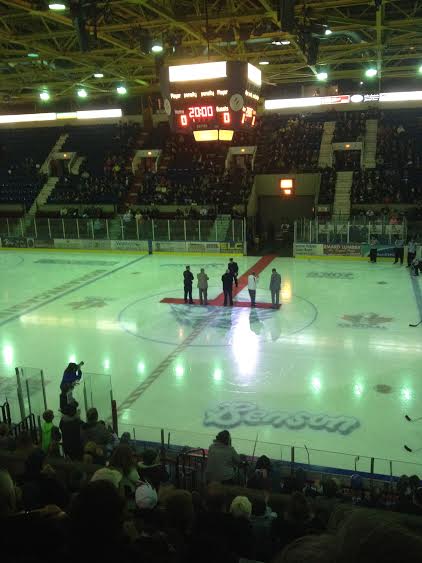 CORNWALL Ontario – Mayor Bob Kilger was booed not once, but twice at the opening of the River Kings game in Cornwall Saturday night. Council Candidate Brock Frost was in full campaign mode as he wheeled out MP Guy Lauzon who prattled about winning the war on Terrorism and MPP Jim McDonell showed up too; but it was Kilger who was at first booed and then booed again when he raised his hand in a gesture.

How could he not have lowered the flag to half mast?

Many fans were upset that the former Liberal Whip failed to have flags flown at half mast especially as the reason for him and the other Politicians present was to honour Cpl Nathan Cirillo who was murdered in Ottawa this week.

The River Kings lost again sinking their record to 2-6 and are tied for last.  It was their second loss in a row as the team has been cursed after Mr. Frost didn’t pay a certain bill and brought bad karma to the city’s favorite hockey team.