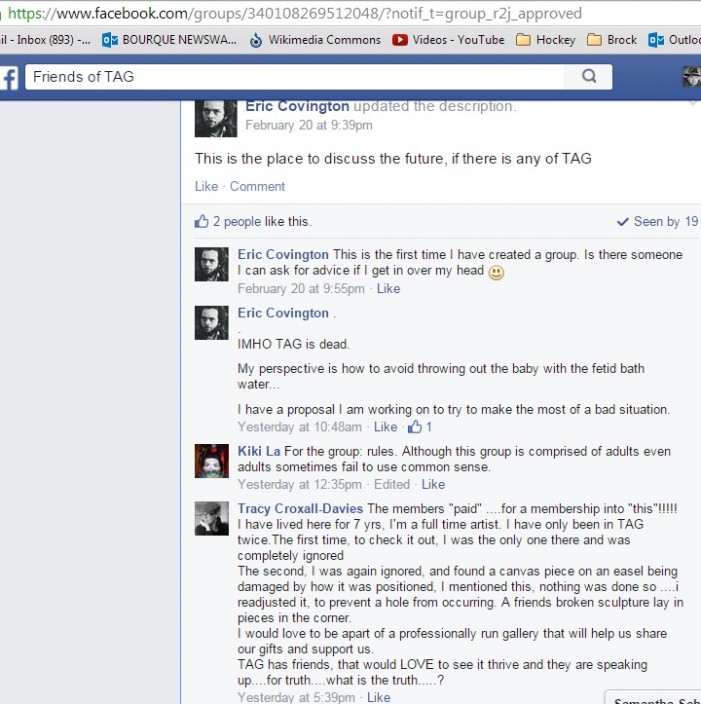 CORNWALL Ontario – First he was on the board of YAC (Your Arts Council) and then he was off, rumored to be regarding a…..Conflict of Interest.

Next Eric Covington joined up with TAG’s new board (The Art Gallery of Cornwall).    TAG, going through it’s third board in less than five years has been struggling at different levels, but has survived for over 20 years on Pitt Street.

I know as I joined the board that night too.    However it became quite clear that Mr. Covington was in a conflict of interest position as he had a clear fiduciary relationship between his show (see image above) and the gallery and could not be involved in discussion impacting its Managing Director who signed his contracts or other financial issues.  When finally confronted he chose to resign, but he didn’t resign simply by admitting his conflict, but instead attacked the board, some of whom he actually had voted for, and the very group he had chosen to represent.

This article was inspired by his bizarre actions since his departure of both boards which culminated today in Mr. Covington issuing a press release of his communication to elected officials deliberating about funding for both YAC and TAG where he clearly stated that they should not get any and then even pushed the plate by demanding that they be forced to merge.

Mr. Covington doesn’t even live in Cornwall, nor to this writer’s knowledge is a tax payer here.   Both groups are fragile.  While they get some form of public monies they are not large amounts compared to other cities.

If arts really are to be important to the growth of Cornwall and the area frankly we need a much larger investment.

That is not to say that those investments should be frivilous or wasteful, but they do have to be made.   You can’t harvest fruit if you don’t plant seeds.

Mr. Covington went as far as to sabotage his own show which was not cancelled by the gallery after he left.  He sent out an email to the artists in the show that didn’t belong to his group citing several mistruths and at least one slur claiming he feared he’d get paid for any art sales which is odd as TAG certainly has a twenty year history of shows in Cornwall.

I have started to make other arrangements for a primo venue in
Cornwall, for my art, during the same time frame. I will include those
who do not wish to show at TAG. No signed contract at this time but I
will let you know.

That quote from his email upset some of the remaining artists who were happy to be showing at TAG, some for the first time in their careers.  It also shows a “If I can’t my way I steal your cookies” sort of mentality.  It seems punitive in nature.

He followed that whopper up after being confronted by a few people as he was publishing this in social media with this even more disturbing comment.

In order to meet my legal commitments to TAG I will be putting one low
cost piece for each of the artists in TAG’s show.

You should understand that I was between a rock and a hard place. Yes I
have a ethical loyalty to the 4 non-PMG artists at least on a personal
level.

I have a fiduciary responsibility to the 9 artists who have put their
trust in me, some of them as their exclusive representative.  The art
that I was going to bring to TAG has a wholesale value of ~$30,000 with
some significant pieces. Some of my artists have incurred hundreds of $
in non-recoverable (non-art) expenses just to be in the show. For this
reason alone I must respect their investment.

Reading this and then reading his release sent to city hall clearly, besides giving cause for someone to shake their head, begs the question of what Mr. Covington goals really were?   I can’t speak for the man, but as someone on the board, which I’m not speaking for in this story, it certainly would give one pause for consideration at the very least.

In TAG we have a long-standing gallery, in a reasonable location, with some assets, both liquid and illiquid, but has become moribund, has a poor reputation with its community and suffers from poor governance.

This is a message he sent to people about to make a decision on a long standing galleries funding?    Is this the voice of someone that really cares about the gallery, the arts, or artists?

Bruce Davis, Executive Director of YAC sent in the following this afternoon to CFN when shown Mr. Covington’s release and asked to comment:

No I was not aware nor was I consulted. I am responsible for the day-to-day operations of YAC and I was not given the chance to assess the viability of this decision. I have not been able to take any kind of proposal to my board of directors for approval of such a merger.

At this point I can not comment on YAC endorsing this suggestion without further assessment. What I can say is, further work needs to be done with both organizations and the city  before any statements can be made around merging. Both orgs TAG and YAC have two very different mandates. YAC’s gallery is about artist incubation, support, growth and development of our artists. It is not a public or professional gallery. We are here to support TAG and the city of cornwall in anyway possible as long as its for the betterment of arts and culture in this area.

Mr. Covington took his battles to social media starting a facebook group that he titled “Friends of TAG”   He invited and encouraged others to harm the gallery and somehow suggest that the current board didn’t follow rules and should be brought down.  He had the support of at least one other board member that had recently resigned as well.

That’s a screen cap from his group.   As board members of TAG we wanted to see what was being said and a statement was issued in the group that it did not represent the board of TAG.  We were blocked from further reading.  And is a group truly of Friends of TAG if they are only approved or invited by one former board member who left in a huff?
.
It shows an “If I can’t my way I’ll  steal your cookies” sort of mentality.  It seems punitive in nature.     Mr. Covington has since changed the name of his group.
.
How can one be transparent if a group is closed and blocks board members of the very group one is claiming to “Friends” of?
. If Mr. Covington thought that TAG was dead why is he contacting elected officials trying to force a merger and kill funding.
.
Surely if Mr. Covington was genuine about helping the arts in our community he’d simply have sent missives to the boards of both groups suggesting a merger?   At no time have I, who has sat with him during his full time of TAG, heard him suggest such a thing?  I have only heard or seen such a thought after he left our board over his conflict of interest.     I have had him tell me directly that he wanted TAG to take over his gallery in Alexandria which of course is not our mandate.
.
There you have it ladies and gentlemen.  An odd and twisted turn of events.
.
Again, while not speaking for the Board of TAG in this article I can tell you personally that the current board is strong and united, duly appointed, and I feel in my opinion utterly supportive of artists and the art community of Cornwall and the area.   I can’t say that for some others.   The testament to any group is the dedication of those that stick it out through good and bad times as opposed to those fair weather fowl who fly away when they simply don’t get their way or fulfill their agenda.
.
It’s as odd as not supporting business incubators or trying to kill one about to evolve.
.
What do you think my fellow artists?  You can post your comments below.

What I see is no leadership at all and only a bunch of pigs throwing poo at one another. This is the usual Cornwall thing and none can get their act together whether politically or in volunteer positions or any other. Cornwall is a lost cause and always will be. The people cannot pull the fleece off their eyes to see how they are being fleeced by the powers that be.

I’d like to see funding for “outside agencies” greatly curtailed” unless they can do some fundraising of their own. This continual waddling up to the taxpayer’s trough has to stop. I see today that the “outside agencies” fund requests for this year is up 36% from last year. “Outside agencies” cannot continue to expect funding from the taxpayers. If they do a substantial amount of fundraising I’d say we can discuss funding. Either that or roll them all into the city organization where they don’t have to waddle up to the taxpayer trough with increased requests year after year after… Read more »

They don’t seem to be getting the message. Council the last couple of years has tried to cap the funds given to “outside agencies.” You’d think that they’d get the hint and not increase their request for funds.

Last night my wife and I had the opportunity to make a statement to the TAG Board of Directors regarding our experience while attempting to create the Luminous Glass Art show, and participated in a frank and refreshing discussion about how to move forward. We were treated with the utmost respect and dignity by a fully functional Board of Directors. I feel that everything regarding our experience as put forward in Mr. Gilcig’s article here is accurate, it is backed by numerous e-mails and screenshots sent and posted by the principal actors. I want to publicly thank the TAG board… Read more »