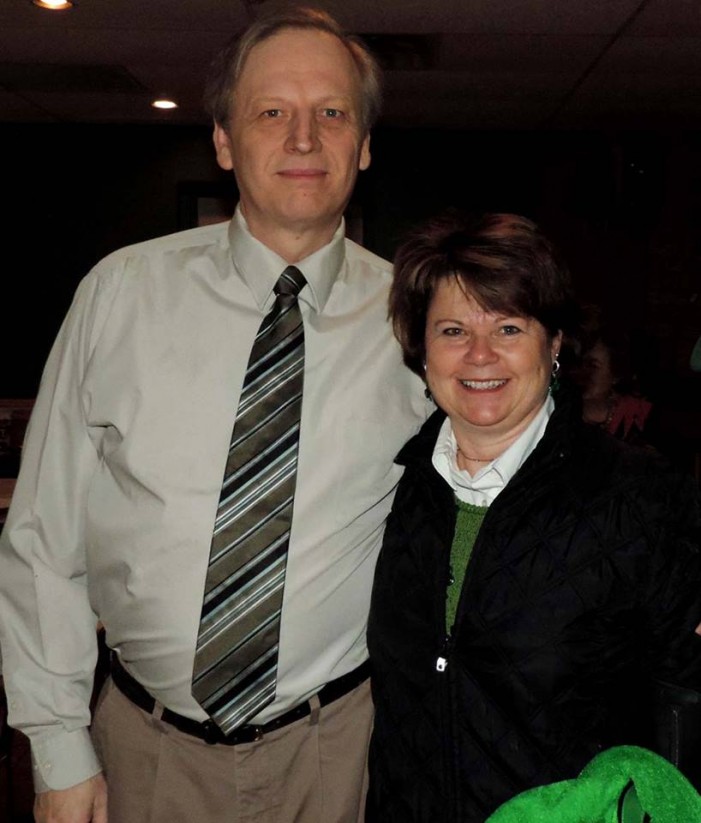 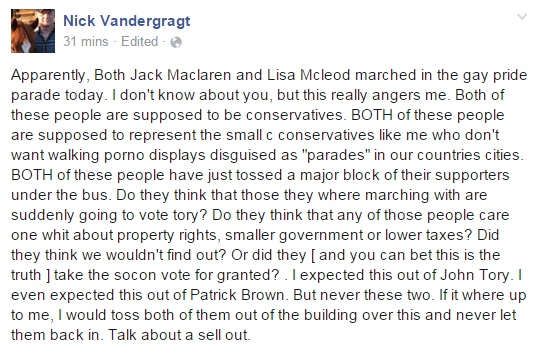 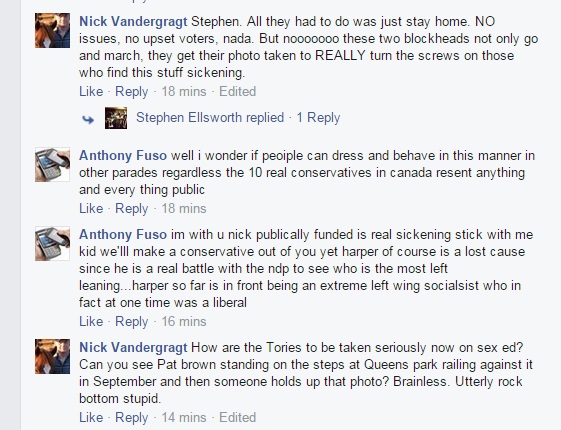 CFRA is a pretty staunch conservative talk radio station, still on the AM dial, in Ottawa, Canada’s Capital.  It’s a mostly senior audience with a lot of folks from the country and rural areas sharing their um…..wisdom.

One of their hosts is Nick Vandergragt who besides being a farmer does a passable job as a talk show host.  He does however have a penchant for veering to the right of Attila the Hun.

His inner ignorance and  homophobia showed today on a facebook rant that he posted about MPP’s Lisa MacLeod and Jack MacLaren participating in a big Toronto Pride parade right after the US finally followed Canada’s lead and voted 5-4 in their Supreme Court to allow Gay Marriage. “If it where up to me, I would toss both of them out of the building over this and never let them back in.”

As ISIS is tossing gay men off of building the ugliness of that quote alone can not be mistaken.   It’s insidious.

Clearly the MPP’s along with PC leader Patrick Brown (who has not confirmed his own sexuality) seem to be having a good time in this twit pic.

Look who i found at the parade!!! There’s got to be 50 Tories here. Who knew??? pic.twitter.com/X3gCIl5nji

Sounds as if Mr. Brown came out of the closet poor Mr. V would have to vote NDP…

Geez Nick, I’d imagine several Klansmen share your sentiments on how some might react to their words… Sounds like Nick took those bonus courses from the Tim Hudak school on earning public trust and consensus?

Did Nick cross a line?  Will he be chastised by CFRA bosses or given Lowell Green’s upcoming morning slot? Can an openly gay Conservative be leader of the party or even a MP or MPP?

When asked on facebook if the page where he commented would be pulled down Nick posted:

I have no intention of pulling this page. If I get canned for standing up and calling things as I see them, so be it.

What do you think dear CFN viewers? Please post your comments below.

EDITED TO FIX SOME TYPOS.