Would You Buy a Car from SD&SG Liberal Candidate Bernadette Clement? By Jamie Gilcig 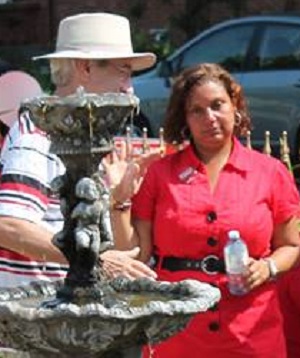 City Councilor Bernadette Clement looked more blue than red as she finally kicked off her campaign in Morrisburg yesterday.    The heat was unbearable and wilted the crowd of mostly seniors and staffers. Ms Clement looks like the heat was getting to her in the picture above during the hot and very lonely afternoon.   Her next opening will be here in Cornwall in the former Kia car dealership.   One of the staffer/supporters on her team is none other than her council confrere Justin Towndale.

Mr. Towndale returned to Cornwall shortly after his working for Sandra Pupatello in her failed run for the Liberal leadership.   Mr. Towndale himself is apparently the up and comer with political rumblings that he will be the candidate to take down Jim McDonell in the next Provincial race.

What do you think dear CFN viewers?  You can vote in our poll and post your comment below.

Would You Buy a Car from SD&SG Liberal Candidate Bernadette Clement? By Jamie Gilcig added by admin on September 7, 2015
View all posts by admin →

7 Responses to "Would You Buy a Car from SD&SG Liberal Candidate Bernadette Clement? By Jamie Gilcig"