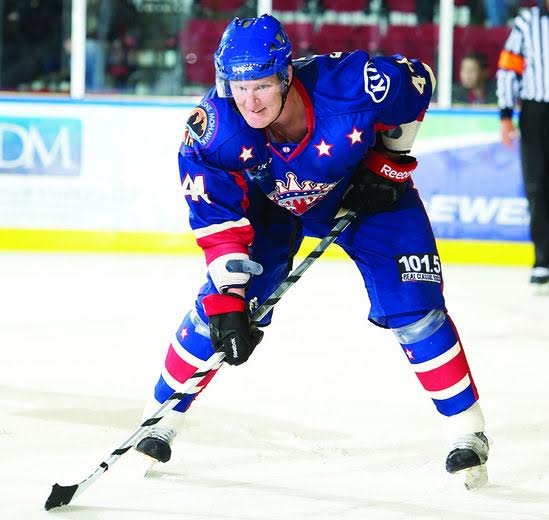 CORNWALL Ontario  – It was a great weekend for the River Kings, both on and off the ice. Head coach and general manager Rick Lalonde has come to terms with fan-favourite Francis Lessard, who will return to Cornwall for a fourth season.

“I’m really happy to be coming back to Cornwall,” said Lessard. “It’s where I started my LNAH career and it was always the goal for me to continue playing in Cornwall with the River Kings.”

Lessard is pleased with the direction the team is heading in and is looking forward to working with Lalonde.

“The organization has always treated me very well and I’m looking forward to a great season with Rick behind the bench,” said Lessard.

For Lalonde, mutual respect was key in getting a contract signed, sealed and delivered.

“We kept the lines of communication open throughout the entire process,” said Lalonde. “It was important to make a deal that made sense for both parties.”

While the focus during the pre-season has been evaluating the skill talent on the ice, there was never a doubt in Lalonde’s mind that the River Kings needed to add size and toughness to an impressive crop of forwards. Lessard certainly addresses that.

“Frank is arguably the most feared player in the league,” said Lalonde. “But he can play hockey as well and he’s an important piece to the puzzle here.”

The River Kings are coming off back-to-back weekend wins over the Laval Predateurs. Cornwall is 3-0 in LNAH pre-season play this fall.

Owner Steve Moreau admits many hours were spent working with Lessard to provide the best for both the player and the organization.

“We are excited that after many months of back and forth and fine tuning, we have come to terms with Mr. Lessard,” said Moreau. “During this time, it has shown just how much Mr. Lessard is a respectful athlete and just how much value he is as an integral part of the Cornwall River Kings. We look forward to having him back in the fold this season.”

Now, it’s time for the City of Cornwall to come out and support the River Kings.

“Rick has done a great job of putting together a great mix of talented, character players,” said Moreau. “I’m excited to start the season.” SCHEDULE: The River Kings wrap up their pre-season schedule next weekend with a game on Friday, Sept. 25 at Trois-Rivieres. Cornwall opens its fourth LNAH season with road games in Thetford-Mines (Friday, Oct. 2 at 8:30 p.m.) and St-Georges (Friday, Oct. 9 at 8 p.m.). The River Kings home opener is Saturday, Oct. 10 at the Civic Complex. Puck drops at 7:30 p.m.