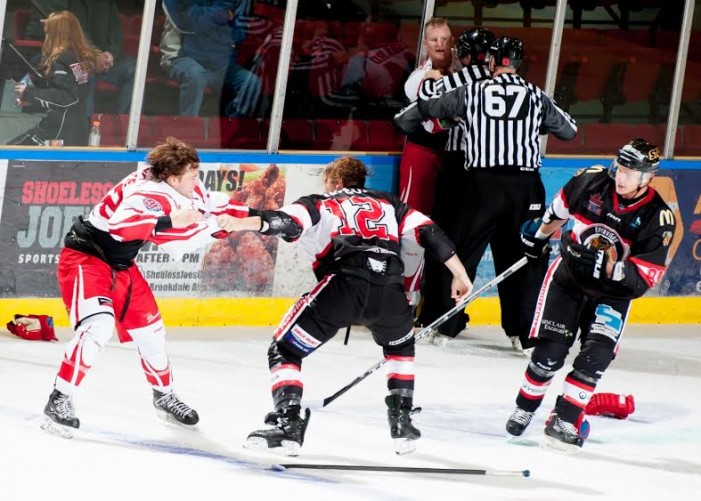 CORNWALL Ontario – The River Kings sent a message to the Sorel-Tracy Eperviers on Sunday afternoon at the Civic Complex.

Cornwall dropped the contest 3-0 in front of 791 fans, but proved they weren’t going down without a fight. The chippy contest featured six scraps as frustration clearly set in for the River Kings (0-7-1) on this afternoon.

Vincent Couture opened the scoring for Sorel at 7:38 of the first when his one-timer off the faceoff beat River Kings goaltender Charlie Lavigne. Etienne Brodeur gave the Eperviers a two-goal lead when Sorel capitalized on a two-on-one at 15:05 of the first.

Marco Charpentier beat a sprawling Lavigne for a powerplay goal at 7:51 of the second.

Then, with 7:13 to play in the middle frame, a line brawl broke out as Francis Lessard, Tidball, Jonathan Jasper and Frederick Cote took fighting majors. Lessard was assessed a five-minute major for being the aggressor.

Cornwall responded with a better third period, outshooting the Eperviers 12-10. The River Kings couldn’t beat Mathieu Dugas, however, who posted the shutout with 28 saves overall.

FRIDAY: At St-Georges, the River Kings picked up their first point of the season before ultimately falling 4-3 in a shootout to the Cool FM. Caron scored twice, including the game-tying goal mid-way through the third, and Sy Nutkevitch had a single for Cornwall. Lavigne was solid in goal for the River Kings; he made 36 stops before turning aside 3-of-4 shootout attempts.

Frederick Cote and Adam Leblanc-Bourque exchange blows during a line brawl on Sunday afternoon at the Civic Complex. In the background, Francis Lessard is held back by two linesmen.