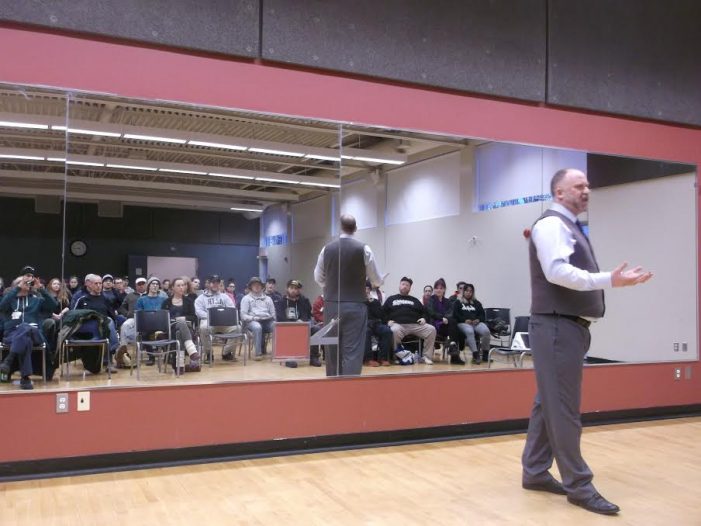 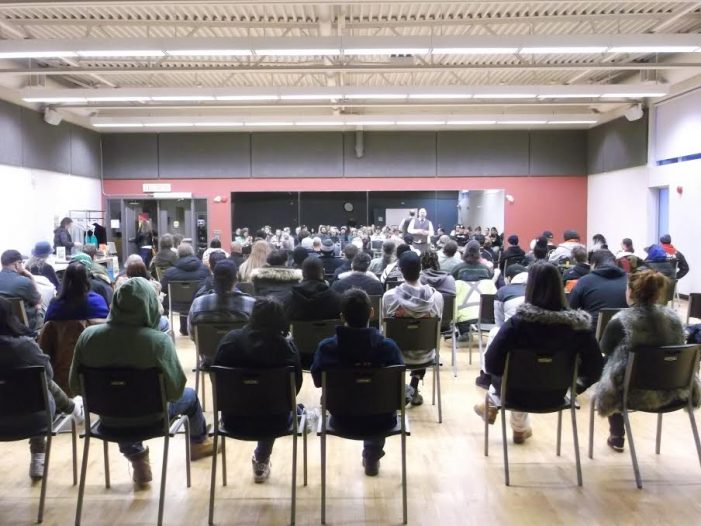 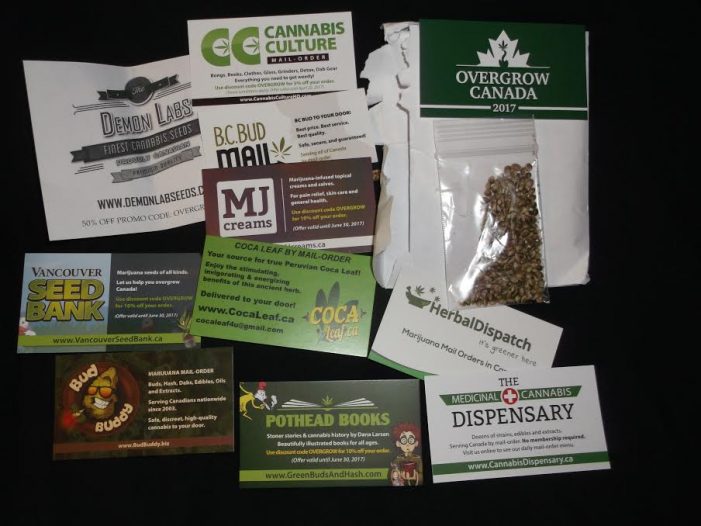 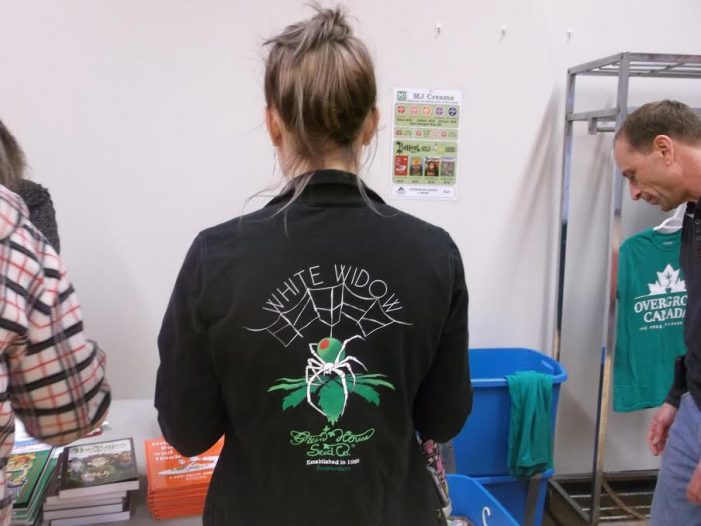 OTTAWA ONTARIO –   Dana Larsen is from Vancouver, owns two marijuana dispensaries, is the author of four books and a prior editor of Cannabis Culture Magazine. He is on a multi-city Canadian tour with a mission to discuss marijuana in terms of it’s history, legislation, adherents and critics. At the same time, he has advice regarding opening marijuana dispensaries. This year he has a goal to give away five million marijuana seeds. So far, “I have given away about two and a half million.” “Ottawa is the twelfth city in my tour. Montreal was a full house. Quebec City went well. I did my talks in Quebec in French or at least in Fringlish. Peterborough, Toronto, London, Windsor are next.”
“Calgary will be my last stop. Only there did the cops have an issue with the marijuana seed give-a-way. It’s odd because there are eighteen shops there that sell seeds.”
The City of Ottawa played host to Dana Larsen by way of the Canterbury Community Centre on Arch Street last night on March 30th.

There were about a hundred people in the audience with a good portion of it sporting grey hair. A table had been set up to provide copies of four of Mr. Larsen’s books, several salves and of course, vast quantities of marijuana seeds packaged in discreet white envelopes. Each envelope contained a hundred marijuana seeds which if grown and properly trimmed and cured would have a street value of hundreds of millions of dollars were they valued at the same rate as current cannabis stocks on the Toronto Stock Exchange.
At about seven that evening for about an hour Dana spoke. “I’m excited and honoured to be a part of this,” he told a welcoming audience. “In 1606, a friend of Champlain planted the first fields of marijuana in Canada. Hemp was absolutely essential to the world’s navy’s for rigging and rope. Soon the world was dependent on Russian hemp who were growing the vast majority of it. England was sending prisoners to Australia to grow hemp. Napoleon would attack Russia to prevent England from having access to Russian hemp.

“From 1850 to 1900 over a hundred research papers would be written about medicinal marijuana. Parke-Davis would become a significant supplier of marijuana. They used dogs to test cannabis strength and reactions. In 1895, the Nova Scotia Medical Journal ran a paper on medicinal marijuana that could have been written last week.  Marijuana was legal and not a big deal at the time.

“How did we get here, how did we get to the point of locking up and persecuting so many? Certainly, a book called, The Black Candle by Janey Canuck, which became a best seller and was serialized in Maclean’s Magazine, had an influence. And certainly, Mackenzie King lead the charge to pass laws by way of the Ministry of Labour.  Harry Forbes is the earliest record of a guy arrested for marijuana joints in 1938.  Marijuana cigarettes that he had purchased at a local drug store got Mr. Forbes six months of hard labour. The illegalization laws had passed with hardly any notice leaving surprised farmers to see whole fields being burnt up by the RCMP.

“And of course, during the 1960’s and 70’s when marijuana use was growing in usage the laws became harsh.”
“Prior to the 1980’s a lot of Canada’s marijuana was imported but the ability to grow indoors began to change with technology. Prohibition laws increased under Brian Mulroney. Are you aware that bongs and vaporizers remain illegal all over Canada?

“Opening a marijuana dispensary is the modern method of civil disobedience against these prohibition laws. The clear majority of dispensaries re-open after being raided.
“Marijuana will become legal in stages. It won’t come all at once. The Feds will make their laws, the Provinces will mull them over…it will come in stages.

“The Large Producers have lost control over the cannabis movement. That’s why I’m going across the country. We overgrow the government by transparently and peacefully participating in this civil disobedience. And when one fellow must step a side someone else will take their place and another that person’s place. You can’t wait for Trudeau. Overwhelm them. I want you to be able to say, “I did something” so that future generations don’t have to fear and risk prison. Join me in planting these seeds to reap a harvest of freedom. “There’s plenty of opportunity to open lots more dispensaries. Marijuana won’t be legal this year or the next. The Feds are just laying down rules that the provinces will deal with years later. I recommend you open a medical dispensary first. Find support from Mayors and City Councillors. Perhaps have a delivery service as opposed to a storefront for medical. Hire Med-patients that have all the government approved documentation so they can possess and handle the product. With the delivery service, you can go to people’s houses, interview them and check the paperwork. Take a chance and go for it. But do think about the risks. Think about what you figure is the worst that could happen. If you aren’t prepared for that then this isn’t for you. There are other avenues you can explore. Start a vapour lounge. If you can help people commit civil disobedience and channel some of that money back into the movement it would be a great thing. Most dispensaries open without a licence. Dispensaries are going to be with us a long time. The Federal government will stall and delay and I think local communities will come to tolerate it.

“The Pride parade was a scary thing and now politicians want to be in front of it. They will eventually stand in front of 4/20. These cannabis companies on the stock market who are scrambling to sell marijuana never supported the cannabis movement and in fact supported the drug war. There should be a moratorium on arrests. Check out the website at OvergrowCanada.com. Any questions?” About half the audience lined up to buy books, take seeds and have further conversations with Dana Larsen.

Roy Berger lives in Ottawa, Canada and has recently published, Thrills and Chills: Demagoguery, Charisma and Freedom with Max Weber, Émile Durkheim and J.J. Rousseau in both French and English editions, and Cloud City :  Colorado in 1880 :  Too Far West.

Please tip the writer by clicking the donate button below!

One Response to "Dana Larsen Gave Away Marijuana Seeds In Ottawa, so there! by Roy Berger MARCH 31, 2017"