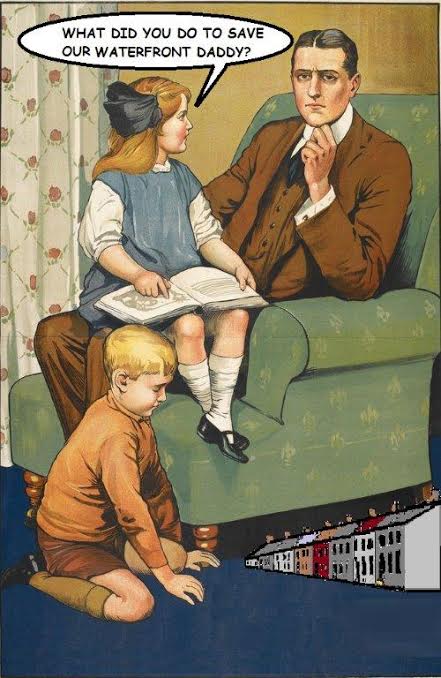 Cornwall Ontario – Are we being misled by city officials and a land developer?  Well… at the very least, a “proposed” condominium development on public waterfront and parkland in Cornwall does seem ominously secretive.

Is this condo and capital venture, skirting the proper divestiture of Federal Lands, and is the City of Cornwall sneakily in cahoots to destroy a public park?

From comments at a POW (Protect Our Waterfront) public forum in Cornwall on July 6, 2017 — held to gauge public sentiment and discuss a “proposed” condominium development on public waterfront and parkland in Cornwall — it appears that Cornwall residents are being presented with “alternate facts” (i.e. falsehoods).

Rather than developer C.H. Clement Construction being in negotiations to purchase government land, it seems a lease renegotiation with Transport Canada and/or the City of Cornwall is being sought.

That lease is currently held by the City of Cornwall which in turn subleases some of the property to the Royal Canadian Legion (Cornwall Branch) for the use of the Cornwall community and youth baseball.

(*N.B. The lands in question border those of our First Nations, yet the residents there are not included in either “approved” process)

So instead of due process, what we have here seems to be obfuscation and corruption of civic duty and propriety.

And is there no stooping too low? …Supposed “consultations” (appearing as community involvement), are actually just inconvenient or nonexistant meet‑ups. There was even a backdoor offer to a tenant representative, to upgrade sports facilities (as a trade-off), all the while failing to mention these are already planned by the city.

The appearance of cheap ethics, backdoor politics, inappropriate favour. and conflict of interest, should be a call to action. Should our parks and playgrounds be taken away in a process shrouded by secret discussions, closed meetings and handshakes?

If you care about quality of life, or what we leave our children and grandchildren, please make your objections to losing our public space known to…

Editor’s Note:  There is a POW Cornwall petition on the group’s facebook page.

Are We Being Misled Regarding Clement Marina Project? By Jonas Malley JULY 7,2017 added by admin on July 7, 2017
View all posts by admin →

36 Responses to "Are We Being Misled Regarding Clement Marina Project? By Jonas Malley JULY 7,2017"