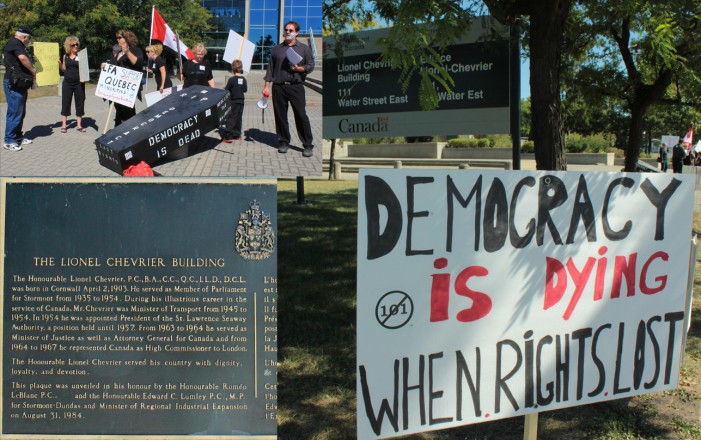 With the soon demise of Cornwall's International Bridge, Lionel Chevrier's dream of a prosperous Cornwall with a fully Canadian Seaway is all but dead - some argue that a similar slow death of basic Canadian rights is taking places at Federal buildings across the land, including this one which bears his name 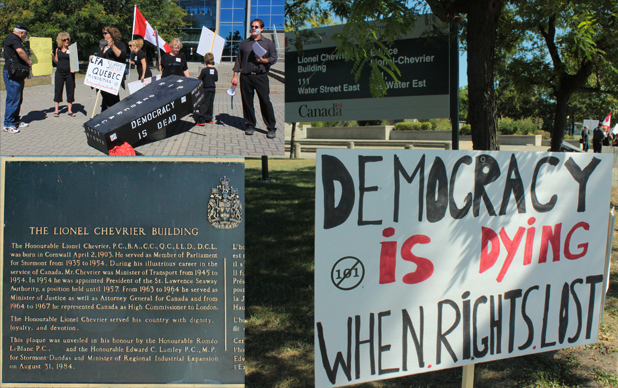 With the soon demise of Cornwall's International Bridge, Lionel Chevrier's dream of a prosperous Cornwall with a fully Canadian Seaway is all but dead - some argue that a similar slow death of basic Canadian rights is taking place at Federal buildings across the land, including this one which bears his name.

CFN – This morning, symbolically standing in solidarity with non-Francophones in the neighbouring province of Quebec, some members of the area’s Language Fairness for All and the Ottawa-based Canadians for Language Fairness groups brought their latest Act of Activism to Cornwall’s Federal building on Water Street, across from the Civic Complex and Marina 200.  They are calling for an end to language discrimination as embodied in Quebec’s Bill 101, which they see as being an illegal and immoral piece of legislation and contrary to Canada’s Charter of Rights and Freedoms, which guarantees freedom of expression for all Canadians.

Joining today’s Act of Activism was an articulate woman by the name of Colleen McIntosh.  Colleen is employed in an officially bilingual, French-dominated workplace and has rallied the courage to speak out against what she perceives as some serious injustices.  In our exclusive video footage below, Colleen and CLF’s Beth Trudeau address their concerns about forced unilingual French in Quebec and forced bilingualism in the Rest of Canada (ROC)  as pertaining to the squelching of free speech.  Beth Tudeau addressed the fact that there are such things as inalienable rights granted by God and that no one has the right to legislate against those rights.  The gathering witnessed one outburst, but it wasn’t the group’s doing.  In our video clip, a very irate man  muttered something about the Natives being here first (he didn’t reply when asked how much Mohawk he speaks).  The incensed fellow bellowed:

“look at the  disturbance  you’re causing because you’re too lazy to learn a second language” and further insisted:  “If you can’t speak French, you shouldn’t be nurses.”

Much larger protests against Bill 101 are being organized by the Quebec Office of the English Language and will take place outside of the Montreal Office Quebecois de la Langue Francaise (NW corner of Sherbrooke and St. Urban) this Friday and Labour Day Monday, beginning at 11 a.m. each day.  As if Bill 101 doesn’t already go too far, outrageous statements made by Parti Québécois leader Pauline Marois have added much fuel to the tinderbox.  Jonathan Kay covered the story in this National Post news article.  Kay reports:  “Surely, it is worth rousing ourselves to pay attention to the fact that this woman is proposing policies that are unconstitutional and even bigoted.”

Increasingly, the LFA group’s efforts are drawing attention from across the land.  Reader comments posted here on Cornwall Free News are coming in from coast to coast.  Tyler McLean of New Brunswick radio’s popular news/talk program McLean in the Morning recently contacted LFA president Chris Cameron to be an on-air guest.  The program, which aired on stations in Saint John, Halifax and Moncton has been recorded and overlayed with video footage from the group’s various Acts of Activism and appears below.  As a direct result of the broadcast, Cameron now finds himself entertaining travel requests to address Maritimers in person.