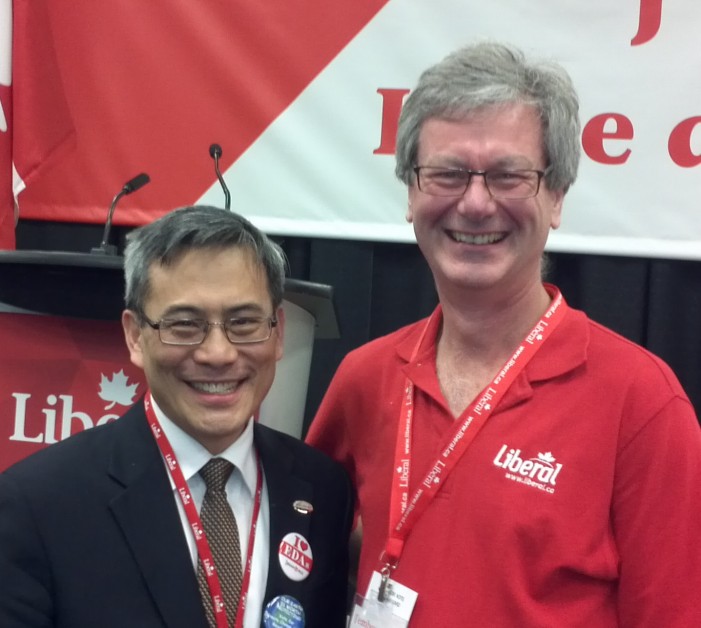 CFN – The is the Liberal Party biennial policy convention in Montreal. What is a policy convention? After all, some presume that the Party Leader does what he wants to get votes.
.
So I asked Maryanne Kampouris about policy development. Maryanne was elected the National Policy Chair in 2012 and is acclaimed this year to a second term. She manages the national policy development process with the regional policy chairs in each province. She does NOT make policy, or chose policy; she manages the democratic grass roots process. And Maryanne is a neighbour, from Glengarry County.
.
Maryanne explains that Liberal members in each riding have 2 years to create and debate policy proposals. Each riding association moves their proposals to regional meetings where they are accepted or rejected by other liberals, amended and improved, or merged with similar proposals from other ridings. Each region then prioritizes a limited number of proposals to send to a provincial policy meeting of liberal members. Each provincial meeting goes through the same open and demoncratic process of improving, merging, and voting on proposals and then sends priority resolutions to the national biennial convention. Policy proposals also come from the Caucus and the four Liberal Commissions of Youth, Women, Seniors, and Aboriginals. At the convention, we voted on and prioritized about 200 policy resolutions, some easy and some controversial, like fracking, end of life treatment, and democratic reform.
.
But does this matter? Maryannne explains that policy reslutions adopted in plenary are official party policies, expected to be in the next platform and supported by our MPs. Those policies adopted in workshops, but not prioritized for presentation to the plenary, are not official Party policy but form a shopping list that the Party can pick from for the next platform. .
Does the Party actually follow the will of the members? Ted Tsu, MP from Kingston and the Islands, is the Caucus Accountability Officer. In a full workshop room, Ted gave account of the the Caucus’ use of official Party Policy. He reviewed the Party’s statements, the leader’s speeches, and the transcripts of the Hansard. He reported to Liberal members that the Caucus advocated for, wrote for, and voted on matters in support of all the policy resolutions from the 2012 biennial convention, except for 3 specific lines. One was on income splitting on tax returns, which Caucus feels is unfair to low and middle income Canadians, one which was outside of the Caucus responsibility, and a third which I forget.
.
Tom Manley in Montreal.

Tom Manley at the Federal Liberal Biennial Policy Convention in Montreal – Feb 23, 2014 added by admin on February 24, 2014
View all posts by admin →