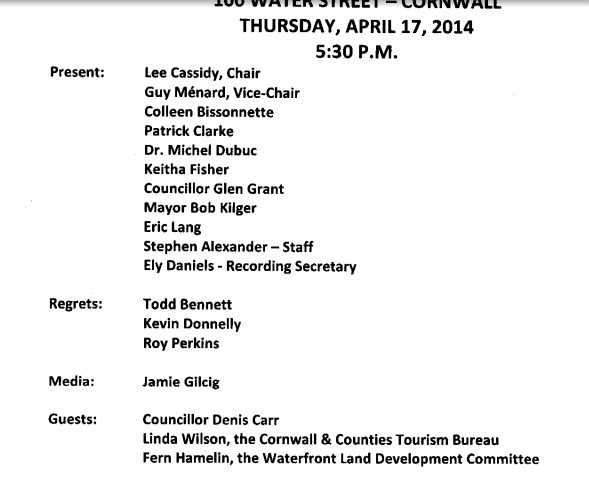 CORNWALL Ontario – I had an interesting chat with two of Cornwall’s finest last night.   Mayhem broke out at the Waterfront Committee meeting.

CFN and myself were blindsided.

For a few years now our high school drop out mayor, Bob Kilger, and some of his friends; I guess because they can’t defend themselves for some of the truths and scandals CFN has exposed, has labelled this online newspaper A BLOG.

And of course they label me A BLOGGER; as though that were some contagious disease.

They’re thinking, if you wish to follow the very weak rationale,  is that if CFN isn’t a newspaper then they have an excuse to behave in the manner that they have; which has  been unprofessional and mostly to hide and refuse to do their jobs?

Before the City initiated its boycott of CFN in December 2011 we received advertising from them.   I’ve interviewed the Mayor who also advertised heavily with CFN during his last bid for re-election.

I was even allowed access to late night sessions at Winner’s sports bar where he held court, and had a few memorable “pop filled” evenings.

But then the lie about CFN, having council suggest its full of profanity etc.    The boycott itself; the conflict of interest by the mayor and several of his councilors; the utter destruction of the whistle blowers; and of course our loss of the Cornwall General Hospital facility and now the selling out of our future by allowing Chem tanks on our waterfront and who the heck know the cost of this divestiture initiative.

Add in totally bogus and false police charges while the mayor is on the police board and his good friend, Pat Finucan, who was in promotional videos for the mayor in his re-election campaign, is the chair.  (I have been charged btw with making nasty phone calls of a horrible nature yet the police did not access my phone or records to see if I had made the calls.  My phone records clearly show that they haven’t and now; nearly two months later the Crown still is dragging this on…)

So nothing really ever surprises me with this motley crew that seem to have no appreciation for the truth; ethics, or integrity; and we won’t go near transparency which Councilor Glen Grant thought hilarious to joke about last night.  (Shall we discuss Councilor Grants extensive efforts to lobby for a city job for the daughter of one of his friends?)

That wacky Mr. Grant decided to amend the minutes of the last meeting. Councilor Grant actually brought up that I should not be listed as media and they muddled through a motion to amend the minutes.

Mr. Bowering then stated that he could not make his presentation to the committee because of the fact that I was suing himself and the Historical Society.    Of course there is nothing legal to warrant that.  While we do have a case in the courts he was not there to discuss that, but the putting up of some plaques which was already in the agenda.   The agenda is a public document.  Closed meetings are announced in advance and the nature of them published.

Instead of handling the issue professionally it was suggested by Mr. Perkins that the committee move into a “CLOSED” session which they hastily voted for thus causing everyone including councilor Denis Carr to have to leave.

Again, you can’t make up this sort of mayhem.  That resulted in a former waterfront committee member, Bill Parisien, standing up to the nonsense that somehow ended up with committee chair Lee Cassidy striking my camera.   Another former member, Bill Beattie chastised the committee and finger waved the mayor, but was allowed to stay because he’s a member of the society although not of the delegation.     The irony of this happening at a meeting with Mr. Bowering in attendance was not lost either.

Ms Cassidy was spoken to by Cornwall Police who attended the event.   However what seems really distressing is that we live in a city that deals with its failures by re-labeling the issue or hiding from it.

Population doesn’t grow?  Annex nearby communities.    CFIB reports a lack of growth; trash the CFIB.   Report finds Cornwall near the bottom of Ontario municipalities in key metrics, stop participating in the report.

That’s simply not “best practices”, and now, when faced with the truth; label the largest newspaper in your city a blog and its editor  a blogger?

I was asked last night; I won’t say by whom; why I stay?  Why I don’t just get fed up and leave town?    That’s a valid question; but I’m a firm believer that the bad guys should leave town and last I heard telling the truth never makes one a “Bad Guy”.  With over 8,000 stories logged in just over five years our content isn’t challenged.  Our truths aren’t challenged.

That’s for people like Chris Savard, and Scott Armstrong, and a few others.

As I’ve always told people in conversation; if I ever left Cornwall it would never be because of people like our disgraced Mayor Bob Kilger and his cronies.  It would be because the good people in Cornwall; the ones that will stop me in the street and tell me how great I’m doing yet are too fearful to stand up publicly themselves, simply would not make the choice and change our city for the better.

CFN has been an online newspaper since day one back in 2009.  We’ve never portrayed ourselves as a “Blog” although we do offer political blogs for elections like many newspapers do as well now.  Blogging is certainly not a dirty word except maybe to some ignorant people from distant generations that have been corrupt so long they don’t realize how corrupt they truly are.

We have been accredited and covered major events, interviewed leaders at all levels, and instead of our mayor and his friends realizing that a National platform actually exists from Cornwall Ontario, whose reputation before was that as a stinky town referred to comically as the arm pit or ahole of Ontario was organically created.  Instead of showing that great things can be created here in Cornwall we’re being attacked like an organ being rejected after a transplant even though that organ is needed for survival.

While the financial relations with some of the other media cloud the picture the message clearly is that if you’re not part of ” the clique” you have no chance of success in this town, will possibly be falsely charged by police, and actually have entities work to run you out of town.      That’s not how you grow a community.  That’s not how you spread the word.

As I returned to the meeting it was ironic to see them agreeing to change their committee name.  This term they filled it with developers that led to a plan to have a condo in the parking lot of Lamoureux Parc which was shot down thanks in part to CFN alerting the public.

They actually tried to rationale how the committee didn’t know anything about the Chem tanks on our waterfront even though the mayor talked about them  at a meeting  in November 2013, and then in December stating he knew nothing, was surprised, but that they’d only stick out of the ground by a bit.

His own press release stated that Economic Development knew of the plan in February 2013 and knew about the lease in June 2013.

Even now, in the dwindling moments of this term the committee wants to spend nearly $100K in tax dollars on its EDA consulting plan.   What is the point of plans if you don’t follow them?   This committee and group need to disband for the rest of this term and those on it need to be banned from being on any city committee again.

They have embarrassed Cornwall and failed its people by the indictment of the presence of those tanks next to Legion Ball Park.

Another Black Eye for Cornwall Ontario As Waterfront Committee Leads to Police Call added by admin on May 16, 2014
View all posts by admin →