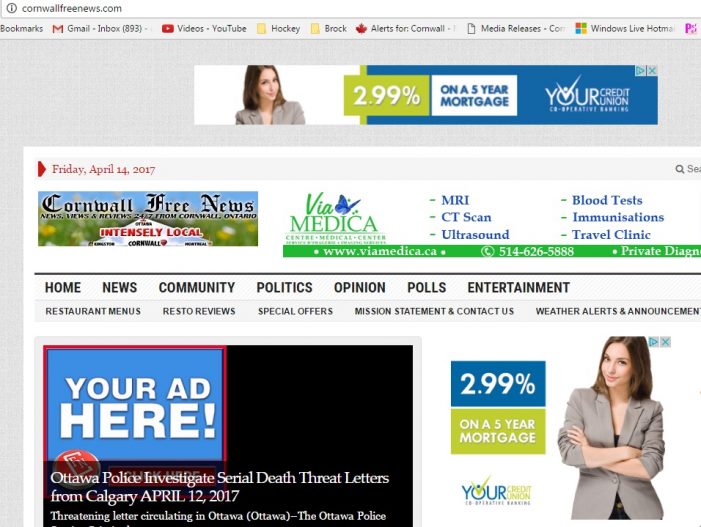 Cornwall Ontario –  I live in a very strange community.  Ignorance and corruption are literally destroying our local economy.   Now two of the main three media are for sale, and the Standard Freeholder is rumored to be wobbly.  Corus Radio chopped its newsroom staff a few years ago as well.

It’s getting harder to get any real news in this community.

When I founded CFN in 2009 it was with positive hope to improve local news coverage in this community which I, and many others, found lacking in the Freeholder and Seaway News.

Sadly, I found out after a few years why that was the case.  The heavy handed, ignorant, and corrupt political atmosphere in this crazy town.   I mean I was once called in by former scandalized CAO Paul Fitzpatrick and “I’m not sure what he does for the city, but pulls in over $150K per year” Mark Boileau for a meeting after the two were incensed that I had used the term “hard on” in reference to Mr. Fitzpatrick’s behaviour towards this locally grown newspaper.   IE  Fitzy had a hard on for CFN.   Which it appeared he kind of did as he spearheaded the boycott by City Hall of this newspaper after his alleged sexual scandal and abuse of city Whistle Blowers.   The boys were insisting that somehow it was of a sexual connotation…even though it’s a very common slang term.

Simply put, other media seem to be afraid to rock the boat and frankly I’m not sure I can blame them.  I’ve seen CFN clients denied permits unless they pulled their ads with us.   This of course is never done “officially”, but points are made.  Just ask how long it took Cliff Crites to allow the Port Theater to get it’s liquor license, or Truffles to get its patio permit?

Now with the announcement that TC Media is looking to dump The Seaway News it truly will be up to the community to support a media outlet if they actually want news.    And with businesses fearful of the wrath of the likes of Bob Peters, Mark Boileau, and some of the other mavens downtown it should be interesting to see how that evolves?

This newspaper has been for sale for two years.  One sale nearly went through, but the city hall led boycott killed it.

Instead we’re growing our numbers inside and outside of Cornwall and becoming a regional paper.    There’s a certain irony in that most times we’ve had to heavily discount ads to support local business.  A recent sales rep said that many businesses told her that they couldn’t afford our $249 yearly banner sale.   So we whipped up a $99 Spring sale only to see people ask who else was buying one as though they were highschool kids.

And the biggest irony, and probably the big reason TC is selling the SN is that they’ve lost their ads to what most likely is the least read newspaper in the community simply because it has the support of one of our worst city councilors, David  Murphy.  The paper is only dumped off at a few retail locations in the city, but does offer the same sort of ads as the Seaway News for cut rates.  It’s as though the local businesses know they have to advertise, but are so worried about upsetting the hypersensitive City Hall crew that they park their ad dollars there instead of where the eyeballs are, which is exactly where you’re supposed to advertise.

Even our own bank, with a board of cliquesters like Don Fairweather and Michael Galvin, boycott CFN and recently did a major Google ad buy. There’s a certain irony that this bank, a business based supposedly on numbers, is literally paying ten times per impression that appear on CFN than advertise with their own long term client.  Now that’s Cornwall!  (Thanks for the ad bucks guys 🙂  ) Frankly the board of Your Credit Union should resign.  You just can’t put your petty prejudices ahead of your role on a board.  It’s just juvenile.   There’s simply no business reason to boycott CFN and it’s funny watching some of the cliquesters fumble their way down the stairs.   And it’s tragic because the people I work with in the bank have always been utterly awesome.   Although I do wonder why they never have had a male teller in all the years I’ve banked there?

This month three events took place in Cornwall with all three boycotting CFN.  They didn’t even send us press releases trying to get a freebie.    Two so far have had lighter than expected crowds.   The third is looking to be a flop.

Does anyone think for example, that the 92,000+ unique visitors, 200,000+ visits, and 1.3M human pageviews in March wouldn’t have helped any of those events, or Your Credit Union sell a few more mortgages?

And we’re one of the few media outlets that actually will publish our real raw numbers.  No voo doo stats.

As was shared recently; the problems that plague this community were here long before I moved to Cornwall in 2004.  There’s no reason to keep repeating them just so Rick Shaver can look cool, is there?

Frankly the problem is the public not demanding and supporting  better media, because honestly media are the only window to the truth that the public has any chance of ever seeing what goes on behind the curtains.

Luckily elections are less than two years away and maybe, just maybe, the people of Cornwall, as they enjoy their new tax increases because of the abuse and mismanagement of this council and management, will smarten up and realize that elections should never be popularity contests.   We don’t choose our doctors or surgeons based on them being a relative or friend of a friend.

There’s one young man, sells cars, a total sweetie, but honestly, not sure I’d trust him to run the city.   He’s banking on his popularity and his facebook crew getting him elected.   That’s scary.  Because it’s way too Brock Frost, and in this town that might happen.  Maybe if he pushed himself as hard to learn the issues, learn politics, and learn how to get real work done there might be some hope, but in the years he’s been talking to me about politics he’s not shown much growth or learning.   Again, awesome guy, expecting a new baby, local guy, and all, but City Council?

Do we need really another generation of Andre Rivette’s?

We trust our elected officials to serve us, but when you look at this Council, MPP McDonell, and MP Lauzon, what do we really see?  Ignorance, closed shop, partisan behavior, bullying, closed schools, less health care, crumbling infrastructure, loss of our art gallery in Cornwall, our youth fleeing in search of a life, and loss of true local business.

So we all get to see if anyone bites on the Seaway News.  We get to see if the Freeholder makes it to the next election, and we get to see if CFN is sold this year or moves to a wider platform.  People don’t realize that we can report on what our viewers seem to want, the exposure of the many silly scandals in this community, from a beach in Spain as long as there’s wifi.

Wouldn’t it all be better if people simply started to hold those responsible accountable and started to work together to make this a better community?   Honestly?  I know I’d love to be a part of a positive improvement of this community.   Do you?

This rant and editorial is purely the opinion of Editor Jamie Gilcig and does not represent the opinion of any other owner of CFN, its viewers or advertisers.

Seaway News For Sale Too – Is City Hall Politics Destroying Media in Cornwall? by Jamie Gilcig APRIL 20, 2017 added by admin on April 19, 2017
View all posts by admin →

9 Responses to "Seaway News For Sale Too – Is City Hall Politics Destroying Media in Cornwall? by Jamie Gilcig APRIL 20, 2017"