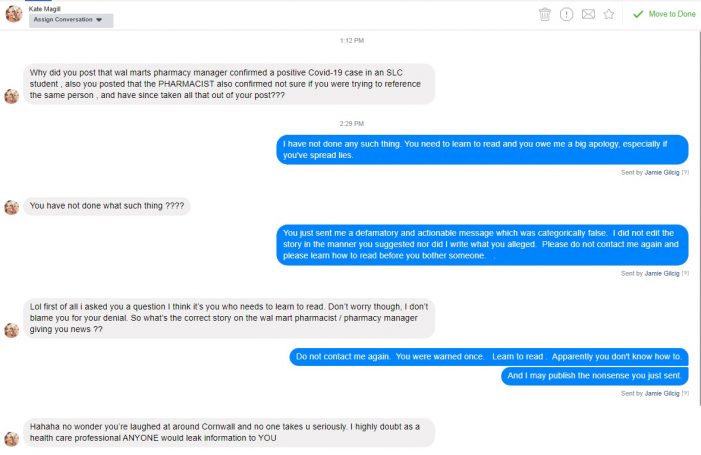 When you work as many hours a day as I do during a crisis nothing makes your afternoon more than an apparent ignorant person spouting falsehoods thinking that you owe her time to defend her abuse.

The story she is referencing is our story which drew large traffic after allegations and confirmation from the working Pharmacist at Walmart in Cornwall regarding 3 SLC Nursing students sent home after coming into contact with a confirmed COVID 19 Coronavirus victim. LINK

This writer took an immense amount of abuse after writing that story Saturday night. Such winning comments were seen such as “It can’t be true because the mayor didn’t announce it” or that it wasn’t on the EOHU.

You get used to this nonsense, especially when you’re an Independent outlet.

However one of the reasons so many journalists get PTSD is because of abuse such as I endured over this story and this afternoon by Ms Magill who believe it or not, according to her facebook profile, is a NURSE @ CCH!

Which is really scary as we have a shortage of nurses, and most are not as rude and ignorant as Ms Magill appears to be and have some reading comprehension skills.

The headline on our story was really really clear.

We continued with this statement.

“Shortly before 11 PM CFN spoke with the Pharmacist at Walmart in Cornwall and confirmed that 3 nursing students today were told to head home and to self isolate. “

The media confirmed that SLC had a nursing student diagnosed. In fact SLC shut down its entire Cornwall Campus the next day and Walmart Pharmacy staff were wearing gloves and masks the next day as well and refused to respond to the story and certainly did not rebuke it. Nor did SLC contact us.

After being asked to stop harassing me several times and not stop messaging me Ms Magill still kept sending messages including me stating quite clearly that I would publish this as I’m doing now.

We live in scary times, but there is no excuse for this behavior at all. We need journalists willing to tell the truth and we need a system that holds people like Ms Magill accountable.

Apparently KATE MAGILL Has Comprehension Issues – Harasses Me Over Walmart Pharmacy Story. By Jamie Gilcig 031920 added by admin on March 19, 2020
View all posts by admin →