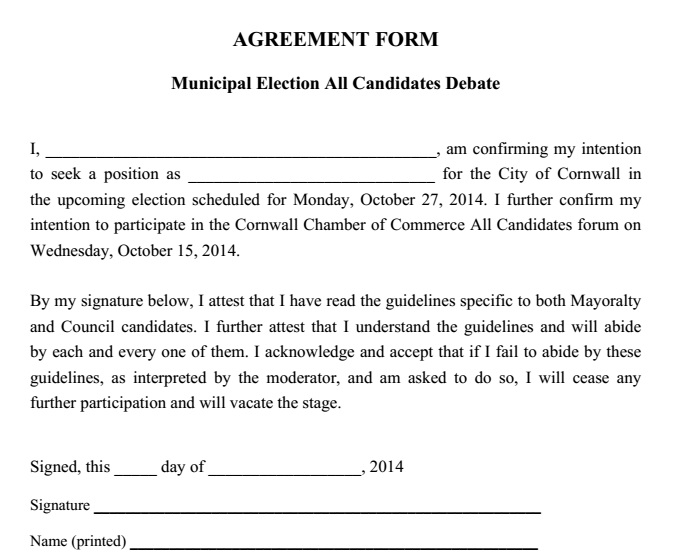 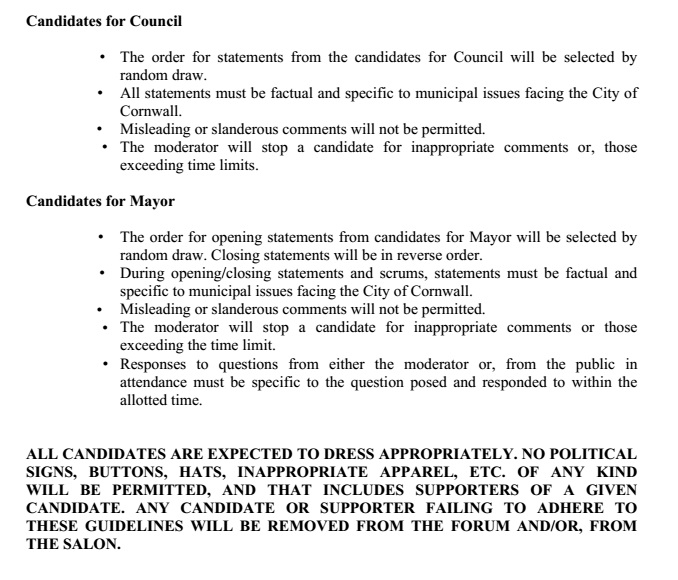 CORNWALL Ontario – I’m facing a huge decision in this election.    The Chamber of Commerce, in spite of the letter from the Ontario Civil Liberties Association, is not backing down on its demands.

For the first time it is forcing candidates to sign a document to participate in the All Candidates Televised Debate on the 15th of October at the Civic Complex.

It essentially is a binding agreement for all candidates that appear and until this election has never been done in Cornwall.

Likewise none of the other debate events in our city involve signing such an agreement. While the form may seem innocent enough at first it’s the combination of the guidelines that truly make this a scary move that would make any fascist proud. There are no definitions or devices to insure what is being asked.   What if a moderator accepts a statement made as factual that isn’t?  What if they decree that a statement of fact isn’t and actually is?  Their own employee, Mike Metcalf, just posted a letter to the editor in Past Chamber President Rick Shaver’s Seaway News that was filled with non factual statements. Will he be a moderator?

Why the last sentence for Mayoralty candidates and not for council?

Is this supposed to be a debate?  Debates get messy.  They include opinion.  According to the document that the chamber is forcing candidates to sign there clearly can be none stated.   Who will be fact checking and will the debates stop if a candidate challenges a fact?

As to apparel we’ve already covered that with Chamber President Kevin Hargreaves stating that the Charter of Canadian Rights and Freedoms doesn’t matter.     As a follow up I asked him what if a candidate wanted to appear in drag?  His answer?

If the candidate lives their life among the LGBT community they can come as they normally would dress, no problem.

I know.  I couldn’t figure out that one either?  I asked him if candidates had to declare their sexuality before appearing at the debate and his response to that was short.

No and I’m done with this question.

One of our candidates is a lawyer and one is a paralegal.  Some running actually know better.   Surely if 31 candidates refused to sign this document a solution would be found but sadly as of yesterday when the chamber issued a final alert only myself, Leslie O’Shaughnessy, Todd Bennett, Davey Bedard, Bernadette Clement, Brock Frost, Greg Kielec, Elaine MacDonald, David Murphy, Gerry Samson, and Guy St. Jean had not returned their signed forms with October 6th being the deadline.

I’ve spoken to my advisors and some of my supporters, and all are pushing me to sign the document and appear no matter how much no elected official should ever sign a document as open ended as this.   Can you imagine signing an agreement with the Feds over our waterfront if it was worded like this?

Frankly the big issue isn’t the apparel clause.  For example if the Chamber had simply asked candidates to wear Black Tie or Business Professional there would be no questions; but this is more about someone wearing a message t shirt than anything else and that’s sad when you think about an organization doing that.    I mean if a candidate did that; or wore a clown suit the voters would judge them accordingly.

It should not be up to the chamber to favor one candidate or another; but it’s the stifling of free speech in a debate that’s of most concern and should be for anyone wanting to represent the greater good of the public.   Are we going to tell Chamber members who to vote for now too; or what to put on the menu’s of their restaurants or not to use pre-cooked frozen foods any longer?

I thought I’d ask our viewers what you thought about Mr. Hargreaves and the Chamber of Commerce first ever documents that seem created for one purpose only and that’s stifling actual debate?

To reach Mr. Hargreaves you can email him at kelseys7091@cara.com or drop in at Kelsey’s (a Cara restaurant) to speak with him in person.

Cornwall Chamber Forcing Candidates To Sign Facts Only Document Before Appearing at All Candidate Debate in Cornwall Ontario added by admin on October 3, 2014
View all posts by admin →