Once again the Rotary Club of Cornwall is selling their Old Fashioned Christmas Hams.   You can purchase these as a gift for delivery in most locations in SD & G OR, you can buy a ham (or several hams) and donate them to the Agape Centre. Receipts will be provided for donations to the Agape […]

For those of you on the Holiday Shopping Warpath – Have a tea, take a breath – it only gets worse! Saturday November 28, 2009 – Cornwall Ontario

Holiday Shopping can be hard work! At the end of your shopping day you don’t want to cook.  If you have the energy why not a lovely evening at Schnitzels. or if you’re too pooped to go out you can always order in some Pizza and munchies from Roma’s Shop Locally, Spend Locally, and Advertise […]

Phil Kessel’s 2 goal 5 shot night led the Toronto Maple Leafs past Florida 6-4.   Jonas Gustavsson got the win.  Alexei Ponikarovsky had a goal and 3 assists while logging over 20 minutes of ice time. Calgary shut out Detroit 3-0 as the Wings woes continue.  Edmonton lost 5-4 in the shoot out.  OTHER […]

Pauline Marois must love being in opposition, but the new wranglings from the PQ may send their numbers behind those of the Marijuana Party.     You can’t force people to do things they don’t want to do in life.   Not for long anyway. The political will has changed mightily since the 70’s.  It’s […]

So Are you Going to Watch the Grey Cup? Montreal vs Saskatchewan – In Calgary, where it just snowed – Sunday November 29

It seems Montreal is in the Grey Cup almost every year.  The problem is that don’t win too often.   QB Anthony Calvillo will have another shot before the grim reaper of football gets to him.    For more news and coverage on the event click HERE please visit our sponsors: 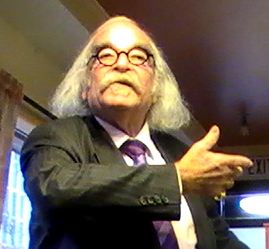 Which Movie are you going to see this Weekend? – Cornwall Ontario – November 27, 2009

Click the Corn to see what’s playing in Cornwall this weekend. Opening this weekend: Ninja Assassin and Old Dogs I don’t like either of these enough to load the trailers. What are you going to see?  Email us your review at info@cornwallfreenews.com or post your comment. please visit our sponsors: 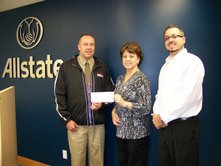 ALLSTATE INSURANCE SUPPORTS CRIME STOPPERS (SD&G) – On the 26Nov09, Seaway Valley Crime Stoppers coordinator OPP Const. Pete Robertson attended the Allstate Insurance Office in Cornwall. He was presented with a cheque for the program in the amount of $1000.00. Ray Eady stated “ partnerships like these enable us to help keep our community a […]

L I N K This should be an interesting case.  For years now Humane Society’s in Ontario have been given increased control over animal control and done some very odd things.    I know of a case here in Eastern Ontario that involved some issues that are in front of the courts that resulted in […]

You’re invited to join the Cornwall and District Immigrant Services Agency’s Multicultural Christmas Party! Sunday November 29, 2009 at the Knights of Columbus Hall 205 Amelia Street in Cornwall Ontario from 6-9 PM.   Tickets are limited and only $8 for adults and $5 for children.   For more info you can call them at […]

City of Cornwall Beaver Control Initiative The City of Cornwall contracts the services of a Licensed Trapper, Mr. Pat Quinn, to set and periodically check beaver traps in the City. Traps are used to control the population of beavers, which is showing an increase from previous years. The traps were placed in mid November and […]

The following details are seizures from November 20th to November 26th, 2009.  One photo from the seizure is attached.  A total of 1,150 cartons of contraband cigarettes seized and one person arrested: On November 21st, 2009, at 4:30 am, officers from the Ontario Provincial Police observed two vehicles departing the parking lot of a local restaurant near […]

Food policy in Canada — it’s a bit of a daunting concept.  In Canada, we are blessed to have a bountiful food supply, very low food costs, and a vast variety to choose from.  But what is our policy about food?  We’ve got regulations about food safety, agricultural policy, and so on.  These are technical […] 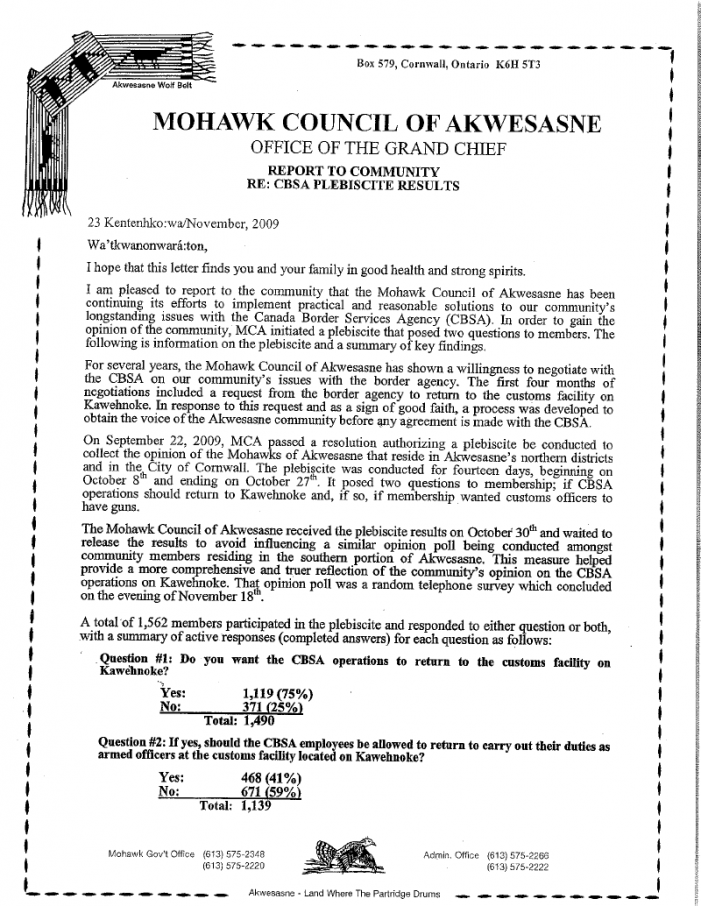 The results are in.   1562 members participated.   Why members instead of citizens??  The results were for the following two questions. 1) Do you want the CBSA operations to return to the customs facility on Kawehnoke?  1119 voted yes, and 371 voted no. 2) If yes, should the CBSA employees be allowed to return […]

The United Way of SD& G has hit the 50% mark of their fund raising goal for the year of $622,500.00.   The United Way locally serves 18 community agencies and needs your help to hit their goal which is always harder during a recession.   Click the links or any of the photos to […]