Cornwall ON – Cornwall Ontario has a long tradition when it comes to tasty Chicken Wings.  It goes back to Freddies and their 10 cent wing nights which would draw line ups and sell as many as 20,000 wings in a single night. I was talking with Paul Lefebvre who was reminiscing about it.  He […]

Moose Creek ON – To continue and end the story of my 60th birthday, my wife and I decided to have the traditional birthday meal at Knox Fine Dining in Moose Creek.  We have been there several times before and have always enjoyed ourselves but I have never written about it. I chose to make […]

Ottawa ON – China Town in Ottawa is quite a mix.   You have fancy palaces and then places where people go to eat every day food. I never like playing tourist.  I like to eat where people eat every day; especially when it comes to ethnic foods. Royal Treasure Restaurant at 774 Somerset St. […]

The Verdict is in on Eight Zero Zero – Our Food Review for Cornwall Ontario’s Steakhouse – December 13, 2010

Cornwall ON – I love doing food reviews especially when they take me to places like Eight Zero Zero in Cornwall Ontario! (off of the Brookdale exit from the 401) If you’re a meat lover this is where you want to be.   If you love Filet Mignon there is no finer place for many, […]

Cornwall ON – We had a lovely day Saturday.   We went to see Burlesque and had a really good time. httpv://www.youtube.com/watch?v=BC7wQylNjyE&feature=fvst Stanley Tucci stole the movie and Kristen Bell as a Dita Von Teese sorta lookalike with a drink issue was kinda fun, but the magic was Christina Aguilera belting out tune after tune. […]

Cornwall ON – It happens once every month or so and it takes a lot of time and love to prepare, but if you’re one of the lucky few to get a seat in the sold out Wine Tastings at Moustache Joe’s you know what I’m talking about. It’s not easy coordinating a high level […]

Cornwall ON – There’s a new place in town.  Not like the old place.   It’s got a cool vibe.  It’s sleek and the beverages flow!  I have a lot of meetings in Cornwall with clients, interviewing people, and general mingling, and there are some fine places, but the new Truffles Burger Bar at the […]

Cornwall ON – It’s that time again.   One of the most amazing epicurean evenings in the Cornwall area takes place at Moustache Joe’s.    They host a wine tasting evening that includes a 5 course meal and speaker.  It’s by Reservation only and sells out quite quickly.   Call Joe, Donna, Amanda, or any […] 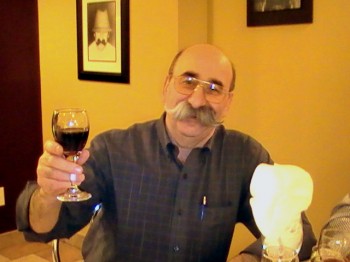 Cornwall ON – I sample a lot of food, and I rarely will write a review so when I do it’s usually because it’s either been amazing or awful. Yesterday I was running from client to client and famished, so I stopped in at Moustache Joe’s for lunch.   I and have always been amazed […]

I’ve lived in Cornwall Ontario now for a little over six years.   Tuesday evening I attended the Monthly Wine Tasting Event at Moustache Joe’s and was blown away. (Our host Joe Aiello with Sylvie Lizotte of the Cornwall Regional Art Gallery) There is a growing dining scene in Cornwall as it’s becoming a destination […]

Wow, was all I can say.     I wanted to surprise my lovely wife on our 2nd Wedding Anniversary.   It coming on a Tuesday night my first inclination was to go out to Montreal and spoil her, but Gaye Adams of the DBIA  keeps telling me to “Spend Locally” as much as I tell people to  […]

I took in breakfast at Spinners yesterday for the first time.  ( 118 Pitt Street )  Spinners realy strives to get that Diner feel down and they do a super job. What struck me most was all of the little touches from the table design to the movie and music memorabilia on the walls, and […]

I need to start taking photos when I do Resto Reviews!   I did breakfast at Harv’s Diner Friday morning for a biz meeting.   I’d never been there before.   While the building looks gray and non descript on the outside, it’s a bright oasis on the inside. Surprisingly busy I could tell why after my breakfast.   […]

They did such a nice job creating their eating space and had just got their liquor license.  It looks like another restaurant in Cornwall may be in jeapardy. Sadly since Chef Shawn left there were an awful lot less cars in their parking lot… Calls to Chez Nous are greeted by the message that […]

There are some great places to eat here in Cornwall.  Alright,  not that many, but a few.    On a nice sunny day a day trip in the country can be a super thing to do. About an hour from Cornwall; just outside of Ormstown Quebec, and near the Covey Hill Road is a hidden gem; […]

L I N K Congrats to local Italian eatery Casa Paolo (1600 Vincent Massey Drive) received a glowing review in The Watertown Daily News.   Click the link to check it out. While not my favorite Italian food in the area it is a lovely place for a good meal. please visit our sponsors: