FEDERAL OFFENDER WANTED (Ottawa, ON) – The Repeat Offender Parole Enforcement (R.O.P.E.) Squad is requesting the public’s assistance in locating a federal offender wanted on a Canada Wide Warrant as a result of his breach of Statutory Release.   Kenneth Peever is described as a caucasion male, 45 years of age, 5’11” (180 cm), 171 lbs […]

Fraud charges in relation to Ottawa based Day Care (Ottawa) —The Ottawa Police Service Organized Fraud Unit arrested and charged a male following a complaint of fraud allegations.  In June 2019, an investigation began following complaints that an Ottawa-based Day Care, which is a non-profit charitable organization, had been defrauded of over $200,000.  The suspect, […]

MISCHIEF UNDER $5000, BREACH Cornwall, ON – Andrew Bourbonnais, 36, of Long Sault was arrested on December 17th, 2019 and charged with mischief under $5000 and breach of undertaking for being outside his residence with alcohol in his body. It is alleged on November 30th, 2019, the man had damaged a carpet in his apartment […] 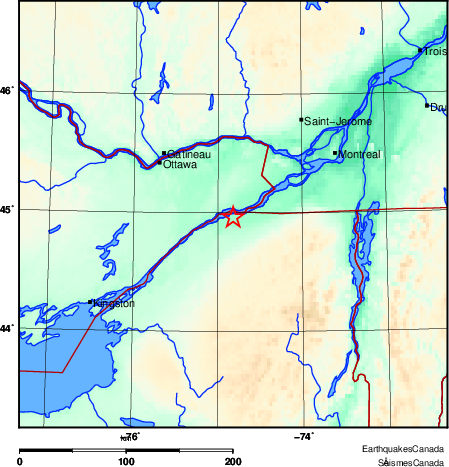 The Earthquake hit us at 9:19 EST AM and was audibly heard in the Downtown Cornwall area. The epicenter was less than 20 km away in Upstate NY. LINK The region is not a stranger to earthquakes, but this was one of the closest to the River City historically.

Assaults Rack Up as Police Refuse to Disclose Crime in Cornwall #CPS 121619 Only 2 of 136 Calls for Service Released.

Published on 2019-12-16 ASSAULT Cornwall, ON – Cole Besner, 19, of Cornwall was arrested on December 13th, 2019 and charged with assault. It is alleged during an altercation with a man known to him, he assaulted the man and police were contacted to investigate. During the investigation, he was taken into custody, charged accordingly and […]

ROBBERY WITH VIOLENCE OPP CHARGES ONE PERSON (SOUTH GLENGARRY, ON) – On December 9, 2019 at approximately 8:10 p.m., members of the Stormont, Dundas & Glengarry (SD&G) Detachment of the Ontario Provincial Police (OPP) responded to a robbery in a residence on County Road 25 in South Glengarry Township. The investigation has determined that two […]

WARRANT ISSUED FOR MUNICIPAL ELECTIONS ACT AND CRIMINAL CODE OFFENCES OPP-led Investigation of the 2018 Mayoral Election (Burlington) (ORILLIA, ON) – The Ontario Provincial Police (OPP) Anti-Rackets Branch (ARB) has issued a warrant for the arrest of a Burlington resident, following an investigation into expense violations under the Municipal Elections Act. During the course of the investigation, evidence […]

BREACH Cornwall, ON – A 63-year-old Cornwall man was arrested on December 12th, 2019 and charged with breach of recognizance x 6 for contacting and being within a distance of a certain person, attending a certain residence, failing to reside at a certain address, as well as failing to notify a change of address to […]

DOMESTIC BREACH, POSSESSION OF A CONTROLLED SUBSTANCE Cornwall, ON – A 36-year-old Cornwall man was arrested on December 11th, 2019 and charged with the following: • Breach of recognizance x 3 (for contacting his ex-girlfriend, failing to remain in his residence, and possessing drugs)• Breach of probation (for failing to keep the peace)• Possession of […]